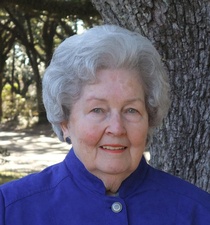 Mrs. Barbara Burke Hopkins passed away peacefully at her home on Tuesday, December 8, 2016. She was born in Long Beach, Ca. on July 29, 1926, and moved to Lafayette in 1938. She attended Carencro High School and Southwestern Louisiana Institute (now ULL). During her sophomore year she transferred to Our Lady of the Lake Hospital in Baton Rouge to become a registered nurse. She was a member of the Cadet Nurse Corps, which was a program designed to aid in the war effort. She graduated from the program in 1947, and began her career at the Lafayette Sanitarium.
In 1948 Barbara married Orren Battle Hopkins. To this union they had three daughters, Carol Hopkins Konecni, Susan Hopkins, and Julie Hopkins Barry. After raising her children, she returned to nursing at Lafayette General Hospital, working part time in the recovery room, and later transferred to Our Lady of Lourdes Regional Medical Center, where she worked in the recovery room for 25 years.
Left to cherish her memory are her three daughters, five grandsons, Matthew Barry, Adam Barry, Drew Konecni, Brent Konecni, and Scott Konecni, his wife, Elizabeth, and their two children, Tyler and Ella.
She was preceded in death by her husband, Orren “OB”; and her parents, Joseph Emmett Burke and Elizabeth Anne Wortman.
A memorial mass to celebrate Barbara’s life will be held Saturday, January 14, 2017 at 11:00 am in the Sunrise Chapel at Walters Funeral Home. Father Howard Blessing, pastor of Holy Cross Catholic Church will officiate the mass. Private inurnment will take place the following Monday in Calvary Cemetery.
The family extends their special thanks to Barbara’s private caregivers, A First Name Basis, the Veterans Care Coordination and Hospice of Acadiana for their loving and devoted care. They also ask that memorial contributions be made in Barbara’s name to Hospice of Acadiana at hospiceacadiana.com.

To order memorial trees or send flowers to the family in memory of Barbara Hopkins, please visit our flower store.