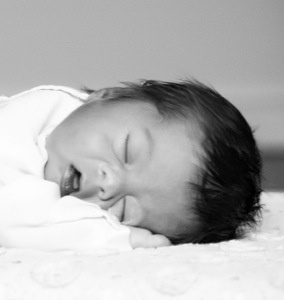 Our precious son, Braxton Michael Matthew Bergeron, received his angel wings Friday, August 17, 2012. Simply anticipating his arrival into this world brought so many people together and lifted up countless intentions and prayers from so many, even those who only heard his name spoken. Needless to say, he was gloriously welcomed into the arms of his parents, surrounded by family, and into the thoughts and prayers of everyone who heard the story of his strong will to beat the odds against him. Doctors predicted his time with us may only last minutes, but his strong spirit and strength from the love of his parents blessed his family with hours. Those hours and the months preceding his much-anticipated arrival have forever changed the lives of so many people, reiterating the fact that he has performed lifetimes of God's work in such a short period of time.
Braxton is survived by his parents, Brent Michael and Sarah O'Meara Bergeron; his paternal grandparents Mike and Phyllis Bergeron; his aunt and godmother, Kathryn Bergeron Head, her husband Jason, and their child Michael Gregory Head; his great-grandparents Donald and Kathryn Menard; his maternal grandparents, John & Sheryl O'Meara; his uncle and godfather, Robert O'Meara; his maternal great- grandparents, Bill and Claudette Ratcliff, and Jerril and Margaret Musso; as well as numerous great aunts, great uncles and second cousins.
He was preceded in death by his paternal great-grandparents Clarence and Archangel Gabriel Bergeron; maternal great-grandparents Margaret & Robert O'Meara; one great uncle Michael O'Meara; and Baby O'Meara.
The family would like to thank the caring and compassionate staff at LGMC, including Dr. Mufeed Afhraf, Fallon, Alisha and Patrice for the care provided to Braxton and the entire family, and a very special thank you to Dr. Daniel Bourque and his staff for their guidance, loving care and incredible support throughout this journey.
A heartfelt thank you to Tiffany Aragona, Bella Blu Photography for giving of her time and the memories the family will have for a lifetime.
The family requests that donations be made in Braxton Michael Matthew Bergeron_s name to Maddie's Footprints in support other families coping with the loss of an infant. (maddiesfootprints.org)
A private interment service was held Wednesday, August 22, 2012.
A memorial mass celebrating Braxton's life will be held at 11:00 am Saturday, August 25, 2012 at Sts. Peter & Paul Catholic Church in Scott, La.

To order memorial trees or send flowers to the family in memory of Braxton Bergeron, please visit our flower store.