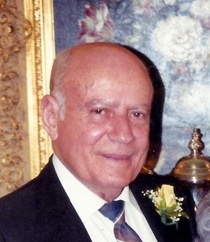 Cecil Hebert passed away on July 12, 2015, just months after the death of his beloved wife, Eva Mae Hebert. He was 85 years old. A Mass of Christian Burial will be held Thursday, July 16, 2015 at 11:00 am in the Sunrise Chapel at Walters Funeral Home to honor his life. The Reverend Monsignor Charles J. Mallet will be the Celebrant of the funeral Mass and conduct the funeral services. Lectors will be Vickie Benoit Dean and Peggy Stutes; giftbearers, Julie Stutes and Linda Daigle. Nancy Tabb Marcantel will perform, "Amazing Grace", "Be Not Afraid", "Ave Maria" and "How Great Thou Art". Interment will follow the mass in Greenlawn Memorial Gardens.
Survivors include his two daughters, Pamela Hebert and Joyce Dwyer; two step-sons, Larry (Rose) Benoit and Donald (Margaret) Benoit; eight grandchildren and thirteen great-grandchildren.
He was preceded in death by his wife Eva Mae Hebert; parents, Marie and Whitney Hebert; two brothers, Wilton Hebert and Rayford Hebert; and one step-son, Robert Benoit.
Cecil was a retired sergeant with the Louisiana State Police. He was a member of the Louisiana State Police Association and the American Trooper Association.
He served his country honorably as a United States Marine stationed in Europe, where he was a French interpreter and truck driver.
Cecil loved working in his shop. He restored furniture and made antique keys; and could fix just about anything. He was an avid master gun smith and antique gun collector as well.
In his free time, he and his wife enjoyed traveling in their camper throughout the United States and Canada. They were both members of St. Patrick Catholic Church parish.
Pallbearers will be Kyle Dean, Quinton Robert Dean, Ron Dupre, Greg Gautreaux, Elwood Cormier, and Charlie Mitchell. Honorary pallbearers include Phil Perrodin, Jules Bourque, Curly Voorhies, and George Parker.
The family requests that visitation be held Wednesday, July 15, 2015 from 2:00-9:00 pm, and resume Thursday morning at 8:00 am until time of service. A rosary will be led by Rev. Mallet at 6:00 pm on Wednesday evening.
Special thanks are given to Frankie Broussard for the care and comfort given to both Eva Mae and Cecil during their illnesses.

To order memorial trees or send flowers to the family in memory of Cecil Hebert, please visit our flower store.