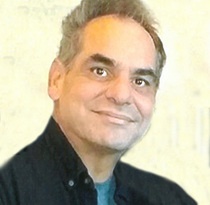 Funeral services will be held Tuesday, April 11, 2017 at 2:00 pm in the Sunrise Chapel at Walters Funeral Home for Charles S. Davis, 53, who passed away April 7, 2017 at his residence. Reverend Nicholas DuPre, Parochial Vicar of Our Lady of Widsom Church will conduct the funeral services. Lectors will be Anita Perez and Julie Thibodeaux. Interment will be in Gallant Fields, the exclusive veteran's section of Greenlawn Memorial Gardens.
Survivors include his wife, Charlotte L Davis of Carencro; two children, Katie J. Miller of Lafayette and Michael S. Davis of Lafayette; two step-children, Heidi L. DuPre of Lafayette and Rev. Nicholas G DuPre of Lafayette; his mother, Janet  Davis of Lafayette; one sister, Vicky  Harte of VA: two brothers, Carroll J. Davis of Carenco and Chris  Davis of Lafayette; four grandchildren, Carley R. DuPre, Victoria A. Legros, Zephyra Miller, and Nathan J. Daigle; and numerous nieces and nephews.
He was preceded in death by his father, John Davis.
Charles Stephen Davis, better known as “Chuck”, was born in Frankfort, Germany to Janet Grossie Davis and the late John Carol Davis. He was a devoted and loving husband, father, son, grandpa, brother, uncle, and friend to many. With an infectious personality and an incredible gift of gab, Chuck made friends with anyone and everyone, wherever he went.
Being the second son of a career military man and a “military brat”, he was a world traveler well before his teenage years. Chuck spent the first six months of his life in Hanau, Germany before moving with his family to Fort Hood, Texas. After two years in Texas, the family moved again, but this time to Okinawa Prefecture in Japan, an experience that Chuck would never forget about. Three years in Japan came and went, and before long the family moved once again back to the States for assignment at Fort Lewis, Washington. Chuck’s dad was deployed to Vietnam during their stay at Fort Lewis, so the family moved to Okmulgee, Oklahoma for a year while praying for their father’s safe return. Once the Vietnam tour was over, the family moved back to Fort Lewis, Washington for 3 years before Chuck finally returned to Lafayette at age 13. Attending North Side High upon his return to Lafayette, Chuck proved too smart for his own good. Easily bored, Chuck found many mischievous activities to serve as an outlet for his talents. A prime example of Chuck’s daily activities, one day teenage Chuck and his friends came across a car in the Northside Wal-Mart parking lot and decided to take the car for a joyride. Realizing the car had mechanical problems, they decided instead to fix the car, and returned it to the exact same spot they found it with a note describing the repairs they had done.
He was a member of the Acadiana Ameteur Club U.S. Signal Core Regiment and best known to many of his friends through his home business, “Chuck’s Electronics” which he operated from 1989 until the time of his passing. Through his passion for all things electronic, he demonstrated his immense talents for being able to fix just about anything on the planet. Chuck was a man of significant talents, and any attempts to truly describe the generous, kind, enigmatic, personable, empathetic, encouraging, and downright self-less man that was Chuck Davis is just simply not possible. A true jack of all trades with a silver tongue, Chuck is a soul that will greatly missed by many the world over.
Pallbearers will be Michael S. Davis, Chris Davis Sr., Carroll J. Davis, Dean Talley, Danny Daigle, Michael LeBlanc, Patrick Lee and Michael Lucas.
The family requests that visitation be held Monday, April 10, 2017 from 4:00 - 9:00 pm, and resume Tuesday morning at 8:00 am until time of services. A rosary will be prayed Monday evening at 6:00 pm.
Memorial contributions can be made in Chuck's name to the American Cancer Society or the Lafayette Science Museum.
Words of condolence may be expressed online at www.waltersfh.com.
To order memorial trees or send flowers to the family in memory of Charles Davis, please visit our flower store.