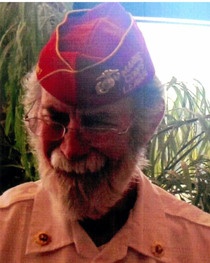 Funeral services will be held at noon on Tuesday, April 26, 2016 at First Baptist Church for Clifford N. Haw, 76, who passed away April 24, 2016 at his residence. Brother Luther Burney of First Baptist will conduct the services. Interment will follow in Gallant Fields, the exclusive veterans section of Greenlawn Memorial Gardens.
Survivors include his wife Shannon B. Haw of Carencro; two daughters, Lisa (Kirk) Bertrand of Carencro and Jennifer Haw of Youngsville; his son, Chip (Roxanne) Haw of Youngsville; one sister, Pansy Breazeale of Pensacola, Fla.; twelve grandchildren; and seven great-grandchildren.
He was preceded in death by his parents, Claudia and Roland B. Haw.
Clifford was a native of Big Cane, Louisiana. He was a long time resident of Youngsville, and had moved to Carencro three years ago. He was a proud member of the Marine Corp League Detachment, and very involved with his beloved church, First Baptist, where he sang in the choir. He worked at Sears for 35 years prior to retirement.
Pallbearers will be Chip Haw, Jackson Manning, Simeon Hocker, Jake Savoy, Jonathan Vaughn, Dustin Vaughn, Travis Bertrand, and Nicklaus Bertrand. Honorary pallbearers include Ernest Bieber, Arvine Atkisson, John Fontenot, Oliver Carmichael, Billy Bishop and Christopher Burney.
The family requests that visitation be held at Walters Funeral Home on Monday from 3:00 - 9:00 pm. Visitation will resume Tuesday morning at First Baptist Church at 11:00 am  until time of service.

To order memorial trees or send flowers to the family in memory of Clifford Haw, please visit our flower store.