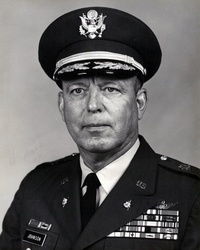 Funeral services will be held Thursday, November 21, 2013 at 3:00 pm at Walters Funeral Home for Colonel Albert August Johnson, Jr., who  passed away on November 16, 2013 at his home in Scott, Louisiana at the age of 90. Father Gary Schexnayder, pastor of St. Elizabeth Seton Chuch, will conduct the funeral services. Colonel Johnson will be honored and laid to rest during a military funeral with full honors at Arlington National Cemetery in Arlington, Virginia, on January 16, 2014 at 9:00 a.m.
He was the beloved husband of Ruth Johnson for 18 years.  He was preceded in death by his parents, Albert A. Johnson, Sr. and Augusta Chauvet Johnson.  He was also preceded in death in 1991 by his beloved wife, Miriam Hession Johnson, after 45 years of marriage.  He is survived by a sister, Rosalie Johnson Marcello.   Loving father of Barbara Fleming (Steve), Betty Becker (John) and Barry Laiche (Michelle).  He is the stepfather of Susan Didier (Mel “Skip”), Troy Simmons (Christine), Keith Simmons, and Marty Simmons (Simone). Grandfather of Darrell Laiche, Stephen Laiche, Cindy Schmidt, Leah Ladner, and Pam Fleming.  Step grandfather of April Winningham, Mallory Simmons (Deceased), Sarah Simmons and Hannah Simmons. Great grandfather of Taylor Laiche, Brennen Albert Laiche, Barry “Brody” Laiche, Miriam Camille Laiche, Lauren Laiche, Parrish Laiche, Madison Laiche, William Schmidt, Brianna Smith, Brooke Roach, Bryce Roach and Trent Mihill. Step great grandfather of Corinne Winningham and Caleb Winningham. He loved spending time with his family and was also the most helpful and caring person to his entire family.
Al was born and raised in New Orleans.  He was very proud to be a career military officer in the United States Army, Transportation Corp.  He joined the Army as a Private to serve in World War II and he attained the rank of Colonel during his 35 years of loyal military service.  He spent his years in the military as a Master Army Aviator flying helicopters and held many command posts.  He is a veteran of World War II, the Korean War and Vietnam.  Al was awarded numerous military honors including the Silver Star, Legion of Merit, Bronze Star, Meritorious Service Medal, Air Medal with twelve Oak Leaf Clusters, Army Commendation Medal with two Oak Leaf Clusters, Purple Heart in 1944 and 1964, and many more.

Al loved recreational vehicles and he and his wife, Ruth, traveled to all the states in their RV and he was an active member of the Cruisin Cajuns RV Club.  He was also very proud to be a life time member of the Washington Artillery of New Orleans, one of the oldest operating military units in the nation.

The family requests that visitation be held Thursday afternoon, from 12:00 - 3:00 pm. Memorial contributions may be made in his name to Hospice of Acadiana, Inc., 2600 Johnston St., Suite 200, Lafayette, LA 70503 and the Washington Artillery Veterans Association, P.O. Box 7584, Metairie, LA.

The family would like to recognize his wife, Ruth Johnson, for the outstanding care and devotion she showed in caring for her husband during his last years and enabling him to remain in the comfort of his home and to enjoy his lovely garden.  A special thanks also to Dr. Ken McCarron and his nurse, Donna, for their exceptional medical care.

To order memorial trees or send flowers to the family in memory of Col.Albert Johnson, Ret., please visit our flower store.