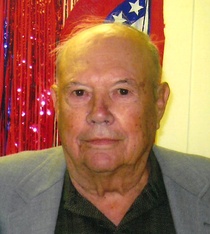 A Mass of Christian Burial will be celebrated at 10:00 AM in Sts. Peter and Paul Catholic Church on Wednesday May 17, for Curley J. Guidry, 92, who passed away at his Scott residence on May 12. Rev. Mark Derise, Pastor of Sts. Peter and Paul will be the Celebrant. A Rosary will be prayed by Dr. Wilton Bergeron at 9:15 AM at the church.

He is survived by his wife, Verdie “MiMi” Guidry of Scott, one son, Terry Guidry of Scott and Doobie Arceneaux of Cankton, whom he considered as a son; and one granddaughter, Claire Barousse of Baton Rouge.

He was preceded in death by his parents, Theo and Louise Guidry and a son Steve Guidry.

Mr. Guidry, a native of Maurice and resident of Scott for most of his life was before his retirement, employed by the US Postal System as a rural mail carrier. He was a veteran of the US Army during World War II, serving in Central Europe, where he received two Battle Stars. He was also a member of the VFW Post 9822.

The family would like to give special thanks to Janet and Patty, for all the care they gave during his last days.

To order memorial trees or send flowers to the family in memory of Curley Guidry, please visit our flower store.