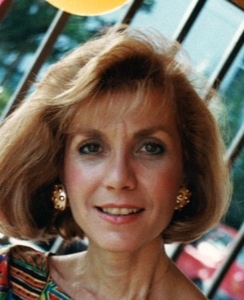 A gathering of friends to celebrate the life of Debra Howard will be held on Saturday, August 18, 2012, from 5:00-8:00 pm in the Live Oak Room at Walters Funeral Home. Debra passed away on August 14, 2012 at Lafayette General Medical Center. She was 59 years old.
She is survived by her husband Mike Howard of Sunset, LA; her daughter Daniella Howard of Oxford, MS; two step-daughters, Julie Barnett and her husband Chris Brown of Morgan Hill, CA and Michelle Allen and her husband Jerry of Henderson NV; her mother, Sylvia Corzan of San Antonio, TX; her brother Mark Mutz of San Antonio, TX; four grandchildren, Brandon Barnett, Rylee and Ryan Allen, and Tyler Brown; her aunt and uncle, Mary and Jerry Myers of Wimberly, TX; and a good friend, Lendon King. She was preceded in death by her father Joseph Mutz and her brother Joey Mutz.
Debra was a native of Juliet, IL and resident of Sunset for eight years. She was an artist and a traveler. She loved all things beautiful, especially her puppies, ceramics, stained glass and Italy. She was an incredibly strong woman who fought cancer for sixteen years and never once let it control what she could or could not do with her life. She remains an inspiration to her family and those whose lives she touched, and is her daughter's hero.
Memorial services will be held Saturday, September 8, 2012, at 2:00 pm at the Episcopal Church of the Resurrection, 5909 Walzen Rd., San Antonio, TX 78218. The Reverend Christopher Cole will conduct the services.
The family requests that memorial contributions be made in Debra's name to the Acadiana Affiliate of Susan G. Komen for the Cure, PO Box 51597, Lafayette, LA 70505.
Words of condolence may be expressed to the family at waltersfh.com.
Walters Funeral Home, 2424 North University Ave., Lafayette, LA 70507; (337) 706-8941 is in charge of arrangements.

To order memorial trees or send flowers to the family in memory of Debra Howard, please visit our flower store.