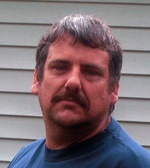 A Mass of Christian Burial will be held on Monday, April 29, 2013 at 10:30 am in the Sunrise Chapel at Walters Funeral Home for Dennis Wayne Simon, 47, who passed away on April 26, 2013. Father Howard Blessing, pastor of Holy Cross Catholic Church will celebrate the mass and conduct the funeral services. Interment will follow in Calvary Cemetery.

He was preceded in death by his father, Donald Simon, Sr. and one brother, Dwayne Simon.

Dennis was a native of Lafayette and resident of Breaux Bridge for the past seven years. He was the manager of the Bridge Bar for the past year.

The family requests that visitation be held at Walters Funeral Home on Sunday from 9:00 am - 9:00 pm, and resume Monday morning at 8:00 am until time of service. A rosary will be prayed at 6:00 pm on Sunday evening.

To order memorial trees or send flowers to the family in memory of Dennis Simon, please visit our flower store.