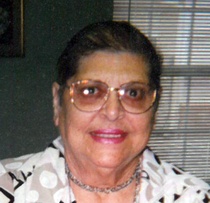 A Mass of Christian Burial will be held Thursday, December 26, 2013 at 1:00 pm in the Sunrise Chapel at Walters Funeral Home for Dorothy G. Richard, 80, who passed away December 23, 2013. Father Brian Taylor, pastor of St. Genevieve Catholic Church, will celebrate the mass and conduct the funeral services. Interment will be in Greenlawn Memorial Gardens.

She was preceded in death by her husband Houston Richard; her parents, the former Lydia Champagne and Willie Gardemal, Sr.; her son Tracy James Richard; and her daughter Darleen Richard.

Dorothy was a native of St. Martinville and resident of Lafayette for most of her life. She enjoyed spending time at the casino with her friends and was known as the "Diamond Girl."

The family requests that visitation be held Thursday morning from 9:00 am until time of service. Memorial contributions can be made in Dorothy's name to Heart of Hospice, 201 West Vermilion St., Lafayette, LA 70501.

To order memorial trees or send flowers to the family in memory of Dorothy Richard, please visit our flower store.