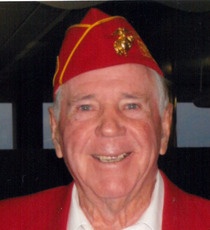 Earl Brown Flatt, 90, died peacefully at his residence, surrounded by his family, on April 24, 2014.
A Memorial, Marine Corps League Celebration of Life will be held on Saturday, May 3, 2014 at 4:00 pm in the Sunrise Chapel at Walters Funeral Home, 2424 N. University, Lafayette, LA. 70507. Visitation will be held at the funeral home from 2:00 pm until time of service.  Ofﬁciating the service will be Thomas E. Green, Commandant Marine Corps League  of Acadiana, and Charles A. McGowen, Chaplain Marine Corps League. Interment will  be private at a later date.
Earl was born on March 20, 1924 in Tennessee, and most recently resided in Broussard, Louisiana.
He is survived by his loving wife of 62 years, Darlene Storey Flatt of Broussard; two sons, Pat Flatt, of Broussard, and Jon Flatt of Austin TX; two brothers, Wayne Flatt of Dallas, TX and Estle Flatt of Nashville, TN; ﬁve grandchildren, Rachel, Wesley, Alys, Leigh Anne, and Olivia; and one great-grandson, Cooper.
He was predeceased by his parents, Jean Baxter Flatt and Minnie Brown Flatt; a sister, Thelma Pickard; and two brothers, Harold and Carrol Flatt.
His joined the Marine Corps at the age of 17 on Sept. 24, 1941, and participated in the Iwo Jima campaign during World War II. He  personally knew the other Marines that raised the ﬂag on Mount Suribachi on the Island of Iwo Jima. His was a proud member of the Marine Corps: a love that continued until his death as a lifetime member of the Marine Corps League. He exempliﬁed the core values of the Marine Corps of honor, courage, and commitment and, most importantly, as a Christian patriot.
He was instrumental in the organization of State Farm Agencies in the State of Louisiana from 1952 and State Farm Insurance Manager for 44 years before his retirement in 1994. He was very involved in Lafayette community service including organizing the Crime Stoppers of Lafayette. He was an active member of the Republican Party of Louisiana, and was a charter member of Oakbourne Country Club. As President of Louisiana Honor Air, he arranged 22 ﬂights to Washington D.C. and assisted other veterans to gather at the Memorial. He gave comfort to many Marine families while attending and sharing his patriotism to the families at numerous memorials and funerals throughout Acadiana.
Honorary Pallbearers include Pat Flatt, Jon Flatt, Estle Flatt, Wayne Flatt, Butch Nolan, Matt Stuller, Rita Dubois Kidd, Bob Storey, Rob Storey, and Tom Lameier.
The family would like to express its appreciation to Iggy Landry, Jenee Segura and the entire staff of Hospice of Acadiana for their unending support. Memorial contributions may be sent to the Marine Corps League of Acadiana or Hospice of Acadiana.

To order memorial trees or send flowers to the family in memory of Earl Flatt, please visit our flower store.