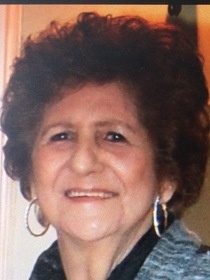 A Mass of Christian Burial will be held at 2:00 pm on Tuesday, May 24, 2016 in the Sunrise Chapel at Walters Funeral Home for Earline Bearb Leger, 78, who passed away May 21, 2016. Father Daniel Edwards, pastor of St. Jules Church, will be the Celebrant of the mass and conduct the funeral services. Lectors will be Ashley Feerick and Charles LaPorte; giftbearers will be Jaden Simon and Chloe Simon. Musical selections will be performed by Jake Artigue. Interment will follow the mass in Sts. Peter & Paul Cemetery.
The family requests that visitation be held Monday at 3:00 pm and continue until the times of services on Tuesday. A rosary will be led by Carral Menard at 5:00 pm on Monday evening.
She was born on December 24, 1937 in Church Point, LA.  Mary, or Earline as she was known by so many, loved the outdoors especially gardening. We often laughed about how she could most likely poke a dead stick in the ground and create the most beautiful plant.  She had an amazing ability to make every person she met feel special and important.  Earline believed in lagniappe which was abundantly apparent when she successfully owned and operated "Chubby's Fried Chicken" on Pinhook Road for many years of her life.  She also worked at Begnaud's Pharmacy in Lafayette for several years prior.
Survivors include her loving husband of 30 years, Joseph Kenneth Leger, her only son Paul and Karen Artigue of The Woodlands, TX, two daughters Debbie Johnson and Stephanie and Robert Armentor, all of Lafayette.  Her sisters include Joyce and Raymond Navarre, Thelma and Patrick "Pat" Colligan, Kathy and Robert "Bob" Johnson, Brenda and Charles "Charlie" LaPorte and Judy and Karl Castille, all of Lafayette and one brother James "Jimmy" and Lana Bearb, also of Lafayette. Grandchildren of Earline, lovingly referred to by many as Granny, include Jake, Ashley, Derek, Will, Jeremy and Ashley, Amanda and Jonas, Ariel, Kristi, Courtney, Brittany, Nicholas and Whitney, Kaleigh and Jason.  Great grandchildren include Jaden, Jayce, Chloe, Aiden, Connor, Ellie, Madden, Milani, Aubrey and Addison.
She was preceded in death by her parents Cleveland Bearb, formerly of Church Point, LA and Alice Darby Bearb, formerly of Sunset, LA and sister Lena Mae Bearb.
Pall bearers include her son Paul Artigue, grandsons Jake Artigue and Jeremy Daigle, son-in-law Robert Armentor, grandson-in-law Jonas Adams and brother-in-law Charlie LaPorte.  Honorary pall bearers include her brother Jimmy Bearb and brother-in-laws Raymond Navarre, Pat Colligan, Bob Johnson and Karl Castille.
The most important thing to Earline was family.  She had a heart as big as the universe and always did everything within her power for... well... anyone and everyone!
WE LOVE YOU MORE!
To order memorial trees or send flowers to the family in memory of Earline Leger, please visit our flower store.