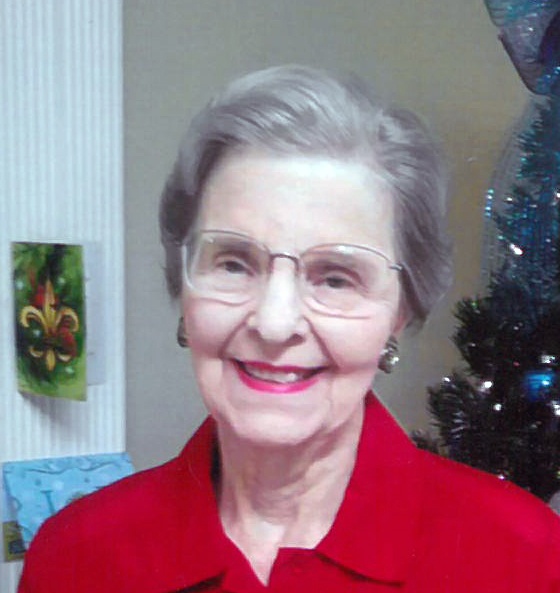 Funeral services will be held on Monday, October 18, 2021 at a 12:30 P.M. Mass of Christian Burial in the Sunrise Chapel at Walters Funeral Home in Lafayette for Mrs. Elizabeth T. “Betty” Dugal, age 90, who died on Tuesday, October 12, at Maison de Lafayette in Lafayette.

Interment will be in Bellevue Memorial Park Cemetery in Opelousas, Louisiana.

Father Howard Blessing will be the Celebrant of the Funeral Mass and will conduct the funeral services. Lectors will be Dwayne Dugal and Julie Edens. Giftbearers will be Elizabeth Ann Dugal and Linda Dugal Sylvester. Karen Broussard, organist, will sing for the services, "Here I Am, Lord", “How Great Thou Art”, "Ave Maria", "On Eagle’s Wings”, and “Just A Closer Walk With Thee”.

She was preceded in death by her husband of 61 years, Dr. George Louis Dugal D.D.S., about whom she once said, “I’ve loved him since I was a teenager.” She is also preceded in death by her parents, Hicks Hilliard Thoms and Olive Pitre Thoms; her sister, Muriel Thoms “Elgie” Sutton; her brother-in-law, Edgar Eugene “Gene” Dugal; and her brother-in-law, Sammy Guy Sutton.

Betty was the valedictorian of the 1948 class of Morrow High School. At SLI (now UL Lafayette), she was a member of the Red Jackets and Delta Theta Sigma and graduated with a BA in Education focusing on English and library science. She both established the first library and managed the first yearbook at Live Oak School in New Orleans. When George graduated from dental school, they moved to Lackland Air Force Base in San Antonio, Texas, for two years. Upon returning to Lafayette, George began his dental practice and Betty began her many years of service to family and community. When a group of young women wanted to start a chapter of Alpha Omicron Pi sorority (successor to Delta Theta Sigma), she agreed to join and become an adult advisor. During the 1960s, when the call went out for Volunteer Civil Defense Coordinators, she answered the call to service. She was an active member of the following organizations: Louisiana Dental Auxiliary, Profit Seekers Investment Club, Alfred Mouton Chapter of the UDC, Louisiana Operation Game Thief board, and the Betty Club. Later in life she converted to Catholicism (George’s faith) under the tutelage of one of the other loves of her life, the Rev. Fernand H. Gouaux. In her spare time, Betty could often be found at her sewing machine; she was an accomplished seamstress. She was also an avid gardener.

The family requests that visitation be observed in Walters Funeral Home on Sunday from 3:00 PM to 5:00 PM with the Rosary starting at 5:00 PM and on Monday from 10:00 AM until the time of the Funeral Mass.

A Rosary will be prayed Sunday at 5:00 PM in Walters Funeral Home.

In lieu of flowers, memorial contributions can be made in Mrs. Betty Dugal's name to the Alzheimer’s Association at www.alz.org.

View the obituary and guestbook online at www.waltersfh.com.

Sympathy gifts can be sent to the Dugal Family through www.GiftShopatWalters.com

To order memorial trees or send flowers to the family in memory of Elizabeth "Betty" Dugal, please visit our flower store.