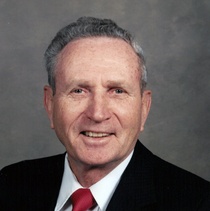 A memorial service will be held Saturday, May 2, 2015, 11:00 am at First Baptist Church for Lieutenant Colonel Elmer E. Adkins, 93, who passed away on March 30, 2015.
He was preceded in death by his wife Jessie and their son, Stephen; and is survived by one sister, two brothers, and many nieces and nephews.
Elmer served his nation in the United States Air Force for 28 years and became a World War II veteran. He retired from the Air Force and began working for the Department of Defense in Washington, D.C., where he represented his military branch before Congress.
After retiring from the Department of Defense he moved to Lafayette and became an active member of First Baptist Church. He was a member of Gideon International, serving as secretary to the Christian outreach program, and was certified as Sir Knight by the Knights Templar of Lafayette. But perhaps the Colonel was best known as "The Candy Man of Lafayette" because he gave candy to everyone he met.
The family requests that visitation be held at 10:00 am on Saturday morning at First Baptist Church.

To order memorial trees or send flowers to the family in memory of Elmer Adkins, please visit our flower store.