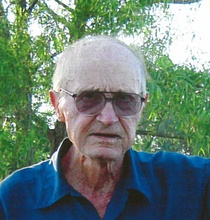 A graveside service will be held at 11:30 a.m. on Friday, November 6, 2015 at Greenlawn Memorial Gardens for Elmer Brown, 91, who passed away at his residence on Wednesday, November 4, 2015.  A eulogy will be given by John Boulanger.
He is survived by two daughters, Ann Rudd and her husband Kenneth of Lake Charles, and Pam Hollier and her husband Daniel of Carencro;  one son, Roger Brown and his wife Karen of Houston, TX;  one sister, Ola Mae Magee of Houston, TX;  two brothers, Harold Brown and his wife Kathryn of Montalba, TX, and J.L. Brown and his wife Betty of Houston, TX;  four grandchildren, Tracie Coker, Chris Theriot, Daniel Rudd, and Jennifer Sumbera;  and six great-grandchildren, Ashley, Matthew, Jayce, Trenton, Cameron, and Emma.
He was preceded in death by his wife of 63 years, Doris Brown;  his parents, Cora and William Brown;  three sisters, Elsie Humphrey, Mary Vannoy, and Gennie Mae Brown;  and two brothers, Lonnie Brown and Clarence Brown.
Elmer was a veteran of the United States Army Airborne, where he was a paratrooper stationed in Japan.  In his free time, he enjoyed gardening, fishing, and working.  He was the co-founder of Tools International Corporation.
Pallbearers will be Daniel Hollier, Daniel Rudd, Kenneth Rudd, Cain Smith, Curtis Sumbera, and Chris Theriot.
The family requests that visitation hours be observed at Walters Funeral Home on Friday, November 6, 2015 from 8:00 a.m. until 11:15 a.m.
To order memorial trees or send flowers to the family in memory of Elmer Brown, please visit our flower store.