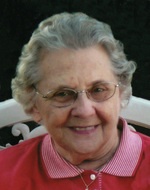 A Mass of Christian Burial will be held Wednesday, April 24, 2013 at 1:00 pm in the Sunrise Chapel at Walters Funeral Home for Elrena May Terro, 86, who passed away peacefully on April 22, 2013. Father Mario P. Romero, associate pastor of Sts. Peter & Paul Roman Catholic Church, will celebrate the Mass and conduct the funeral services. Musical selections will be performed by Phyllis Simar and Ron Moreau. Lectors will be Melissa Thibodeaux and Peggy Terro; gift bearers, Jordan Baugh and Kyle Thibodeaux. Interment will directly follow the funeral mass in Sts. Peter & Paul Cemetery.

Survivors include her husband Elgin Terro of Lafayette; two daughters, Charlotte Prejean (Russell) of Thibodaux and Darlene Hobart (Paul) of Youngsville; one son, Dale Terro (Peggy) of Arnaudville; one sister, Margie Credeur of Duson; five granddaughters, Melissa Thibodeaux, Nicole  Fanguy, Rae Belanger, Megan Cummins, and Jessica Terro; and nine great-grandchildren.
She was preceded in death by her parents, the former Lucia Trahan and Aldeus Sonnier; two brothers, Hayward Sonnier and Wincie Sonnier, and one step-grandson, Nic Hobart.
Elrena was a native of Duson and resident of Lafayette for most of her life. She worked in the cafeteria at Edgar Martin Middle School for 15 years, and was involved in the Ladies Auxiliary of VFW on Albardo Road.
Pallbearers will be Paul Hobart, Dale Terro, Russell Prejean, Jordan Baugh, Tim Fanguy, and Aaron Credeur.
The family requests that visitation be held from 4-9 pm on Tuesday, April 23, and resume Wednesday morning from 8 am until time of service. A rosary will be led by Brady LeBlanc at the funeral home on Tuesday evening at 6 pm.
Walters Funeral Home- 2424 N. University Ave., Lafayette, LA 70507. 337.706.8941, is in charge of arrangements.
To order memorial trees or send flowers to the family in memory of Elrena Terro, please visit our flower store.