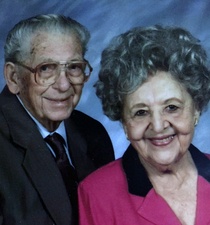 A Mass of Christian Burial will be held on Monday, January 5, 2015 at 10:00 am in the Sunrise Chapel at Walters Funeral Home for Emily "Mim" and Lannie “Poops” Webb, ages 92 and 99 respectively. The couple passed away peacefully at their home in Lafayette on January 2, 2015, just hours apart. They were married for 73 years.
Father Michael DeBlanc, associate pastor of St. Genevieve Catholic Church, will officiate the mass and conduct the funeral services. Lectors will be Peggy Stutes and Suzette Bridges; gift bearers will be their great-grandchildren, Ethan and Madison Biggs. Jodi Bollich, organist and soloist, will perform "Amazing Grace," "Shepherd Me, O God," "Ave Maria," "His Eye Is On The Sparrow," and "How Great Thou Art." A joint interment will follow the mass in Calvary Cemetery.
The couple is survived by their son Glenn Webb and his wife Madeline of Lafayette; their granddaughter Shannon Webb Biggs and her husband Ian of Scott; two great-grandchildren, Ethan and Madison Biggs; Mim's brother Herman "T-Boy" Landry, and his wife, Betty of Lafayette; Mim's niece, Mona Landry of Atlanta; Mim's nephew, Ricky Landry, and his wife Suzanne, of Lafayette; and Mim's godchild, Suzette Lantier Bridges of Little Rock, Ark.
They were preceded in death by Mim’s parents, Elida and Arthur Landry; Lannie’s parents, Josephine and Lazaire Webb; and Lannie's sister, Georgia Landry.
Mim was born November 3, 1922 in Coteau, LA. She graduated from Lafayette High School in 1940. As a young girl she used to sing on the radio, and received a music scholarship from Southwestern Louisiana Institute of Liberal and Technical Learning (now University of Louisiana at Lafayette).
Lannie was born December 16, 1915 in Cecilia, LA.  He graduated from Lafayette High School in 1934, and then moved to Port Arthur, TX to work as a Texaco roustabout.  Afterwards he attended Barber College in Houston, and began working in Houston as a barber for six months. He moved back to Lafayette and worked at Hebert’s Barber Shop, City Barber Shop, and the Gordan Hotel Barber Shop before he built his own place, Webb’s Barber Shop on Louisiana Avenue. He barbered there for 66 years, before retiring.
The couple was married November 30, 1941 at St. Genevieve Catholic Church. Within their first year of marriage, Lannie was drafted into the United States Army. He was stationed in Ketchikan, Alaska for two and a half years serving as an MP. During this time, Mim worked at Charity Hospital. The couple reunited in Terre Haute, Indiana, where they resided for a brief time before moving back to Lafayette and into their Surrey Street home. Mim was so proud to tell people that she and Lannie had paid off their home before moving into it by renting it out and saving while they were away.
Mim was truly loved by all.  She was fun, charismatic, animated, and the best joke teller you knew.  Her love of God, family and friends was phenomenal, and her ability to always make people laugh was a gift. She loved organizing her class reunions and hosting them at her house.  She attended weekly luncheons with her various lady groups like the Beauty Shop Gang, and enjoyed hosting dinners and slumber parties with her YaYa Gang at her beautiful home.  She loved high-heeled shoes! Once she could no longer wear them, she began collecting little ones.
She also loved to cook. She always welcomed anyone into her home and offered them food and comfort.  Her pecan pies were one of her specialties. To quote her, “If I had to do it all over again, I wouldn’t change a thing!”
Lannie was an extraordinary person; quiet and humorous in his own special way. He loved to watch westerns (he called them cowboy shows), old sitcoms like Sanford and Son, and Saints football. In his free time he enjoyed showing and raising pigeons, and spending time outdoors.  He was gifted with a green thumb, and proudly raised his American flag in his front yard every day. He especially enjoyed dancing with Mim.
He was a member of the Knights of Columbus, Louisiana Pigeon Club, and the Modena Pigeon Club.  He was also a member of the Barbers Association and the American Legion.  He’ll be remembered as a gentle soul filled with wisdom beyond belief. His simplicity and ingenuity has taught many valuable lessons to all those who loved him.  Patience and diligence were two of his many admirable traits. Mim always said, “When they made Lannie, they broke the mold!”
The Webbs were loyal parishioners of St. Genevieve Catholic Church. Their faith guided their entire life and they relied on it to help others in need. Mim particularly took comfort in praying the rosary.
Pallbearers for the service will be Ian Biggs, Ethan Biggs, Ricky Landry, D.J. Landry, Jacob Landry, Harold Lee Stutes, Tom Green, Donnie Bridges, Johnny Olivier, Alfred Ducote, Gerald Sonnier, and Vernon Romero. Honorary pallbearers include Herman Landry and Douglas Rouly.
Visitation will be held on Sunday, January 4, from 1:00 - 9:00 pm, and resume Monday morning at 8:00 am until time of services. A rosary will be led by Sister Laura Melancon at 6:00 pm Sunday evening.
The family extends their heartfelt thanks to her very loving and compassionate caregivers, Darrel Johnson, Annette Pierson, Sandra Bernard, and Frankie Broussard; the Amedysis Home Health Care nurses, Aimee, Vicki, and Amanda; and Julie Guilliot from Leading Health Care of Lafayette for her continuous encouragement and support.  Special thanks are given to Linda Rouly for her tender loving care and always helping Mim feel better by fixing her hair for her.

To order memorial trees or send flowers to the family in memory of Emily "Mim" Webb, please visit our flower store.