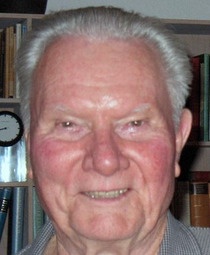 A gathering of family and friends will be held May 17, 2014, from 1-4 pm at the home of Eric and Judy Nielsen, 1033 Kimbell Drive, Breaux Bridge, LA 70517 to commemorate the life of Eric Thomas Dane Nielsen, Sr, 86, who passed away on Wednesday, April 16, 2014 at his home in Lafayette.  He was born August 30, 1927 in New Orleans to Cpt. Eric Christian Marius Nielsen of Thisted, Denmark and Mary Augusta Mine Nielsen of New Orleans.
After attending Adolph Myer and Martin Behrman HS in Algiers, LA he attended  the United States Merchant Marine Academy.  He was on active duty in the Mediterranean when WWII ended.  He graduated from the USMMA in Kings Point, NY in 1948.
He served as a Midshipman on the Merchant ship“Del Norte”.  When on shore he had a retail business, MirMar, Inc. dealing with merchandise for seamen aboard merchant ships.
He Married the love of his life, Nancy Brackett Vandiver of New Orleans on May 17, 1952.  After a three month honeymoon he took his commission in the U.S. Navy and served as Damage Control Officer aboard the “LST USS Freemont”, flagship of the Amphibious Task Element.   He and Nancy loved Ballroom Dancing and he moonlighted as an instructor for Arthur Murrahy Dance School.
After Korea he worked for Ogen, Woodriff and Dwyer designing Air Conditioning Systems, followed by Bernard and Burke, where he served as a HVAC control draftsman and troubleshooter. Later he joined Honeywell, Inc., and from 1961 to 1978 he was Senior Sales Engineer for their office in Baton Rouge, LA.
After retiring the family moved to Lafayette, Louisiana and Eric went into the Test and Balance (TAB) business 1978, founding Acadian Air Balance, Inc; with Nancy.  In 1980, he obtained his certification from the National Environmental Balancing Bureau.
Together he and Nancy raised their four children:  Susan Doiron of Lafayette, LA, Cynthia Rich of Canton, GA, Eric, Jr. and Judy DeJean Nielsen, and Robert and Cindy Law Nielsen of Breaux Bridge, LA.
Eric was a most loving grandfather to Troy (Christina Medlin) Doiron, Kristen Doiron (Chad Duhon), Ashley N. (Tobias Idhammar), all of Lafayette,  Dr. Eric III and Carolyn Louth Nielsen of Manhattan, NY, Christine Roewe and Mary Rich of Woodstock, GA, Anna Cowan of Lafayette, Sara and Chase Nielsen of Breaux Bridge, LA and 16 3/4 Great Grand Children.
He is also survived by his two brothers, Thomas CD Nielsen and Ginger Lee of Baton Rouge and Jens JD and Diane Hotard Nielsen of Gretna; his sister Karen ED Nielsen of Picayune, MS; his sister-in-law Dr. Susan V. Nicassio of Lafayette and ULL along with many, many beloved nieces and nephews.
He loved his family, Nancy’s fabulous meals, walking and talking at the mall, and was a friend to everyone he met.  He especially enjoyed playing poker, organic gardening and his dear friends and family who listened to his wonderful life stories.
Special thanks go to his daughter Cynthia who, along with Hospice of Acadiana's own Sussane Huval Stelly and many others, cared for him at home in his final days.
To order memorial trees or send flowers to the family in memory of Eric Nielsen, Sr., please visit our flower store.