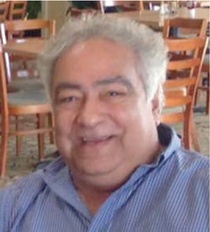 On July 15, 2016, Farris John Tanory died peacefully in Santa Barbara, California, surrounded by his family. He was 61 years old. A Celebration of Life ceremony will be held in his honor on Saturday, July 23, 2016 at 2:00 pm in the Sunrise Chapel at Walters Funeral Home. The family will receive guests prior to the service starting at 1:00 pm, and a reception will follow the service in the Reminisce Room at Walters Funeral Home.
John is survived by his three children, Nicholas John Tanory of Austin, TX, Tara Jasmine Tanory of Youngsville, and Sean Farris Tanory of Santa Barbara, CA; two brothers, Joe Tanory of Virginia Beach, VA and Richard Tanory and his wife Lynn of Lafayette; three sisters, Tena Hall of Minnetonka, MN, Penny McGehee and her husband Jim of Lafayette, and Lisa Boudreaux and her husband Rex of Baton Rouge; two grandchildren, Eva Marie and Luke Wayne and his beloved Old English Bulldog, Buster.
He was preceded in death by his parents, Jasmine Catherine and Farris John "Duke" Tanory; and one sister, Barbara Tanory Flowers.
A native of Lafayette, John "Little Duke," "Duke," or "JT" as he was known by most, was born on February 1, 1955. John moved from Lafayette to Santa Barbara, CA becoming owner of a successful oil service business. In his free time, he enjoyed music, especially playing drums and listening to the Beatles, and entertaining friends and family by hosting poker nights and backyard barbecues.
The family requests that memorial contributions be made in John's name to Discaleed Carmelites of Lafayette, 1250 Carmel Drive, Lafayette, LA 70501.

To order memorial trees or send flowers to the family in memory of Farris John Tanory, please visit our flower store.