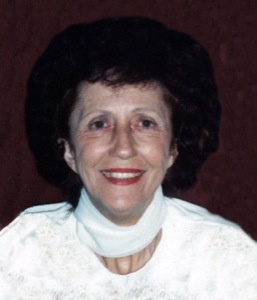 The beloved matriarch of our family, Florina "Flo" Domingue, known to family and friends as "Girlfriend," passed away peacefully at her home surrounded by family on March 6, 2013. A Mass of Christian Burial will be celebrated at 11:00 a.m. on Saturday, March 9, 2013 in the Sunrise Chapel at Walters Funeral Home. Father Brian Taylor, pastor of St. Genevieve Catholic Church, will be the Celebrant of the funeral Mass and conduct the funeral services. Jodi Bollich, organist and soloist, will perform "Here I Am, Lord", "Ave Maria", "Panis Angelicus", "J'irai La Vois Un Jour", and "How Great Thou Art". Lectors will be Amy Duhon and Brooke Wisian; giftbearers will be Quinlan Duhon and Mackensie Duhon. Interment will follow in Greenlawn Memorial Gardens.

She was preceded in death by her first husband and father of her children, Stanley Duhon, her second husband Lucas Domingue, her parents, the former Odile Cormier and Louis Smith; two sisters, Betty Cecil and Cindy Bisigiani; and one brother, Harry Smith.

A native of Carencro and resident of Lafayette for most of her life, Flo worked in the fashion industry as a young lady at La Parisienne in downtown Lafayette and in 1971 opened her own boutique, Flotena's, with her business partner, Tena Bright. She liked to travel, and took many trips with family and friends, both in the U.S. and Europe. She enjoyed sewing, gardening and baking, especially around the holidays when friends and family would wait with delicious anticipation for her peanut butter fudge, pralines, English toffee and coconut macaroons. She loved playing Scrabble and was as an avid card player, particularly skilled in playing Canasta and Bouree, which she loved playing with her daughters, granddaughters and friends.

Pallbearers for the service will be Carl Duhon, B. Ross Walters, Lucas Duhon, Ricky Smith, Todd Forester and Matt Hebert.

Special thanks are given to her caretaker, Rose Duncan, her physician, Dr. Jody Rosson, and the staffs of LTAC, LGMC, Nursing Specialties and Heart of Hospice.

To order memorial trees or send flowers to the family in memory of Florina "Flo" Domingue, please visit our flower store.