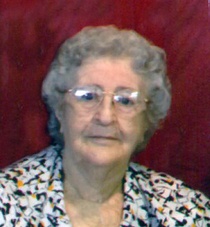 A Mass of Christian Burial will be held Friday, October 16, 2015 at 10:00 a.m. in the Sunrise Chapel at Walters Funeral Home for Genevieve Sonnier, 86, who passed away on Wednesday, October 14, 2015. The Reverend Brian J. Taylor, Pastor of St. Genevieve Catholic Church, will officiate the funeral ceremony. Interment will take place at Greenlawn Memorial Gardens in Lafayette.
She is survived by one daughter, Donna Frazier of Lafayette; two sons, Jim Sonnier and his wife Juanita of Carencro, and Charles Sonnier and his wife Connie of Port Barre; six grandchildren, Christopher Frazier, Summer Saunier, Shane Sonnier, Shawn Sonnier, Jason Sonnier, and Laney Young; and seven great-grandchildren.
She was preceded in death by her husband, Loray J. Sonnier; her parents, Gabrielle and Maurice Boudreaux; and one brother, Charles Donald Boudreaux.
Pallbearers will be Chris Frazier, Maxie Huval, Lonnie Saunier, Jim Sonnier, Shane Sonnier, and Shawn Sonnier.
The family requests that visitation hours be observed on Thursday, Ocober 15, 2015 from 10:00 a.m. until 9:00 p.m., and on Friday, October 16, 2015 from 8:00 a.m. until time of service.  A rosary will be prayed on Thursday evening at 7:00 p.m.
The family would like to send special thanks to the staff at Evangeline Oaks Nursing Home.

To order memorial trees or send flowers to the family in memory of Genevieve Sonnier, please visit our flower store.