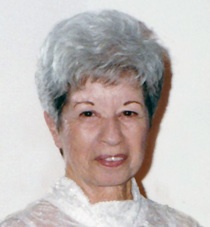 Lafayette native and Houston resident Georgie B. Adams passed away on April 9, 2017. A rosary will be prayed on Saturday, April  15, 2017 at noon in the Live Oak Room at Walters Funeral Home. Deacon Kyle Faber will lead the rosary and conduct the funeral services in Calvary Cemetery. The family will receive visitors from 9:00 am until the rosary begins on Saturday morning.
Georgie was born on February 5, 1925 to Mabel and George Barnes. She graduated from Mt. Carmel in 1943, and moved to Houston shortly thereafter, where she remained until her passing.
Georgie is survived by her daughter, Julie Ann Adams Kramr of Houston, four granddaughters and eight great-grandchildren.
She was preceded in death by her husband Jules Gayral Adams; her son George Gayral Adams; parents, the former Mabel Walters and George Barnes; two sisters, Lucille Melancon and Margerite Rabalais; and one brother, Paul Barnes.
The family requests memorial contributions be made in Georgie's name to Houston Hospice, 1905 Holcombe, Houston, TX 77030.

To order memorial trees or send flowers to the family in memory of Georgie Adams, please visit our flower store.