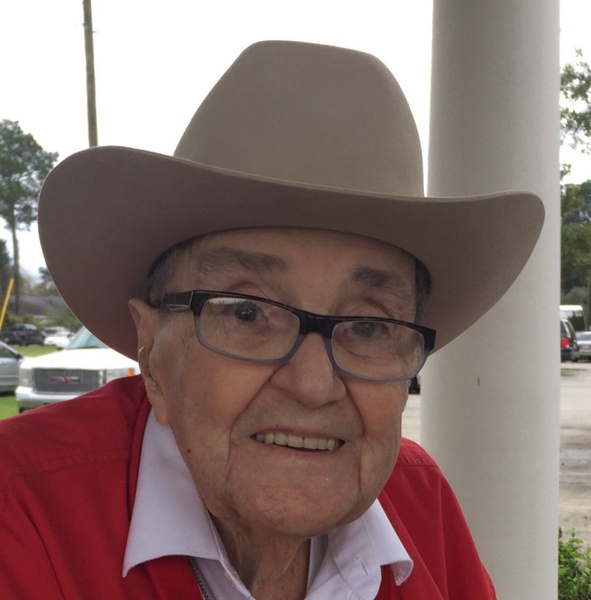 A Mass of Christian burial will be held at 11 a.m., Saturday, December 16, 2017 in the Sunrise Chapel at Walters Funeral Home for Goldman Anthony McBride who died Tuesday, December 12, 2017 at his residence. The Very Reverend Monsignor Russell Harrington, Pastor of St. John Berchmans Church in Cankton, LA will celebrate the Mass.  Lectors will be Nicole Cooper and Ian Fontenot; gift bearers will be Amanda Boyer and Michelle Flores. Burial will be in Calvary Cemetery.

He was preceded in death by his wife and the mother of his children, Lilly Breaux McBride; his parents, John and Armonte Bellard McBride; one sister, Eldine McBride Lavergne; six brothers, Tom, Alvin, Anderson, Otis, Zannie and Sidney McBride; and one grandchild, Louis Dooley, Jr.

As a native of Church Point and a resident of Lafayette most of his life, Mr. McBride served in the United States Army during World War II in the European Campaign.  He is a member of the Knights of Columbus Post #1276.  He enjoyed spending time with his children, cooking a wonderful dinner, gardening and playing a good game of Boureé.  He was employed by Coca Cola for 20 years and retired from the City of Lafayette.

A rosary will be led by Gwen Doucet at 7 p.m. Friday evening.  The family requests visiting hours to be observed from 4-9 p.m., Friday, Dec. 17 and from 9 a.m. until time of services on Saturday.

Special acknowledgements go to Acadian Hospice and Palliative Care and to the caretakers, Jennifer Mayfield and Gwen Marks.

Words of condolence may be expressed online at www.waltersfh.com

To order memorial trees or send flowers to the family in memory of Goldman McBride, please visit our flower store.