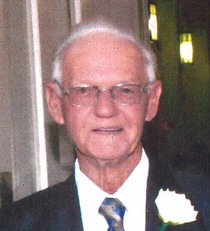 A Mass of Christian Burial will be held at 2:00 pm in the Sunrise Chapel at Walters Funeral Home for Harold Johnson, 87, who passed away October 10, 2016 at his residence. Father Gary Schexnayder, pastor of St.Elizabeth Seton Church, will be the celebrant of the funeral mass and will conduct the funeral services. Lector will be Debra Guidry; Chyvonne Angelle and Elisha Angelle will be the gift bearers. Karen Broussard, organist and soloist, will perform "How Great Thou Art", "Old Rugged Cross", "Peace In The Valley" and "Here I Am, Lord". Interment will follow the mass in Calvary Cemetery.
Survivors include his wife, Cora B. Johnson of Lafayette; two daughters, Belinda (Johnny) Cavazos of Lafayette and Angela (Robert) Clement of Lafayette; four sons, Harold Lee Johnson of Lafayette, Eli Joseph (Roxanne) Johnson of Ville Platte, Shawn David Johnson, and Quinn Shannon (Lisa) Johnson of Lafayette; eight grandchildren, and seventeen great-grandchildren.
He was preceded in death by his parents, three brothers, and two sisters.
Harold was a native of Arnaudville and resident of Lafayette for most of his life. He was a veteran of the United States Army. He was employed by Frank C. Rogers Electrical Contractors for 43 years, and the City of Lafayette for 25 years prior to his retirement at age 85. While working for the City, he was known as "Topsy" due to his expert knowledge in his field.
Pallbearers will be Harold Lee Johnson, Eli Joseph Johnson, Shawn David Johnson, Quinn Shannon Johnson, Rocky Clement, and Christian Cavazos. Honorary pallbearers include Raywood and Donnie Johnson.
Visitation will be held at Walters Funeral Home on Thursday, October 13, 2016 from 4:00 - 9:00 pm, and resume on Friday, October 14, 2016 from 8:00 am until time of services. A rosary will be prayed Thursday evening at 7:00 pm.
To order memorial trees or send flowers to the family in memory of Harold Johnson, please visit our flower store.