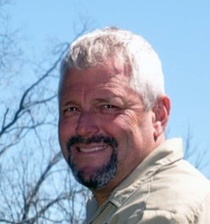 A Mass of Christian Burial will be held at 11:00 a.m. on Tuesday, March 21, 2017 in the Sunrise Chapel at Walters Funeral Home for Harry Paul Gary, 48, who passed away on Thursday, March 16, 2017.  The Reverend Gary Schexnayder, Pastor of St. Elizabeth Seton Catholic Church, will officiate the funeral ceremony.  Interment will take place at Greenlawn Memorial Gardens immediately following the services.

He was preceded in death by his mother, Vernola Anne Guidry;  his step-father, Warren Allen Guidry;  his beloved mother-in-law, Charlotte Aucoin;  and all of his grandparents.

Harry was the proud owner of Harry Gary’s Lawn Service, Inc.  He started cutting grass when he was 12 years old, and took great pride in his work and attention to detail.

He was considered a “Jack of all trades,” known for helping anyone who was in need.  In his free time, he enjoyed watching football, cooking for his family and friends (they will remember his barbeque and boiled crawfish), watching his daughter singing and dancing, and watching his sons play football and soccer.

To order memorial trees or send flowers to the family in memory of Harry Gary, please visit our flower store.