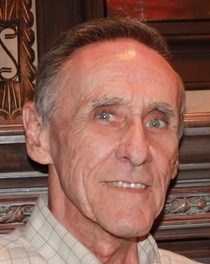 New Iberia native Harvey James Broussard, 73, passed away peacefully on Monday January 4, 2016 at his residence in Lafayette surrounded by loved ones. A Mass of Christian Burial will be held Friday January 8, 2016 at 1:00 pm in the Sunrise Chapel at Walters Funeral Home to commemorate his life. The Very Reverend Monsignor Russell Harrington, pastor at St. John Berchmans Church in Cankton will celebrate the mass and conduct the funeral services. Scriptures will be read by his sister, Juanita Gulotta and Marianna LeBlanc Wysocki; giftbearers will be his two granddaughters, Meleah Walker Kimball and Mallory Walker. Musical selections will be performed by Phyllis Richard Simar and sung by his great nieces Ruth and Ramsey Gulotta. Interment will follow at Calvary Cemetery.
Survivors include his beloved wife of 45 years, Yvonne LeBlanc Broussard, originally from Breaux Bridge; two daughters, Chantel Broussard Walker and her husband, Perry Walker of Lake Charles and Michelle Broussard Dugas and her husband, Ray Dugas of Carencro; five grandchildren, Meleah Walker Kimball and her husband Joshua Kimball, LCpl Micheal Walker, Zachary Walker, Mallory Walker and Baylen Dugas; his sister Juanita Broussard Gulotta and her husband Paul of New Iberia; his brother Louis A. Broussard, Jr and his wife Laura of New Iberia; and two aunts, Alice Hebert and Helen Marin.
He is preceded is death by his parents, the former Hazel Hebert and Louis A. Broussard Sr.
Harvey was a loving husband, father, and grandfather who treasured time with family and became an avid sports fan after retirement. Prior to serving in the Louisiana National guard, he worked for Cabot Corporation for 9 years and then retired from Shell Oil company in 1999 as a Production Operator. His favorite sport was hockey, and was a proud Icegators season ticket holder for twenty years. Brought to his first game the Inaugural Season by his son in law, Perry Walker, it was in his blood. In 2000, his youngest grandson, Baylen had hockey in his blood as well and Harvey spent several years of retirement traveling various states as a "hockey grandpa". When not at a hockey game, he enjoyed cheering on the Ragin Cajuns and LSU, regardless of the sport. He also thoroughly enjoyed the time he spent after retirement with his brother Louis, going to car auctions.
Pallbearers will be his brother Louis A. Broussard Jr, his brother in law, Paul Gulotta Sr., his two son-in-laws, Perry Walker and Ray Dugas, and two of his grandsons, Zachary Walker and Baylen Dugas.
Honorary pallbearers are his grandson LCpl Micheal P. Walker, currently serving in the Marines in Japan, Uwell Poirrier, Ronald Theriot his godchild, Dr. Paul Gulotta Jr., and Joshua Kimball.
Visitation will be Thursday, January 7, 2016 from 3:00 - 9:00 pm, and resume Friday morning at 10:00 am until time of service. A rosary will be led by Randy LeBlanc, first cousin of his wife, at 7:00 pm on Thursday evening.
The family would like to thank Dr Julian Krawczyk, Dr Stephen Person, the staff at Oncologics and Hospice of Acadiana, especially his hospice nurse Joleen.
Donations can be made to Hospice of Acadiana 2600 Johnston St #200 Lafayette, La 70503.

To order memorial trees or send flowers to the family in memory of Harvey Broussard, please visit our flower store.