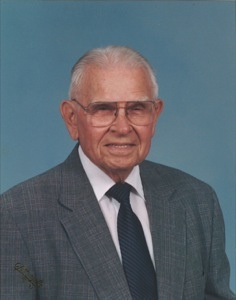 Entombment will be in Lafayette Memorial Park.

Reverend Robert Richardson will officiate the services. Jodi Bollich, organist and soloist, will sing "In The Garden," "How Great Thou Art," and "On Eagles Wings."

He is survived by his wife Annie B. Mashaw, and was preceded in death by his parents, Andrew Louis and Mattie A. Mashaw; two sisters, Mary B. King and Margaret L. Roton; and five brothers, William Mashaw, Louis Mashaw Jr., Jack Mason Mashaw, Howard R. Mashaw, and Lane Hicks Mashaw.

A native of Lewisville, Arkansas and longtime resident of Scott, Mr. Mashaw was a member of First Baptist Church of Lafayette. He worked as an accountant at Sun Oil Company and retired after 32 years of service. During World War II, he served in the United States Army, Pacific Theatre of operations.

The family requests that visitation be held from 4-8 p.m. on Sunday and from 9 a.m. until services on Monday.


To order memorial trees or send flowers to the family in memory of Herbert Mashaw, please visit our flower store.