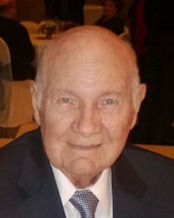 Funeral services will be held at 2:00 p.m. on Friday, December 30, 2022 in the Sunrise Chapel at Walters Funeral Home for Hilliard Gilbert, 94, who passed away on Tuesday, December 27, 2022.  Father Bill Melancon, Pastor of St. Rita Catholic Church in Catahoula, will conduct the services. A private family graveside service will take place at Greenlawn Memorial Gardens.

Hilliard was an avid fisherman who also enjoyed hunting and shrimping.

The family would like to extend special thanks to the Doctors, Nurses, and Staff at Our Lady of Lourdes Regional Medical Center (especially Tiffany and Megan), and everyone at St. Joseph Hospice Carpenter House.

In lieu of flowers, donations can be made in his name to St. Joseph Hospice Carpenter House in Lafayette.

To order memorial trees or send flowers to the family in memory of Hilliard Lee Gilbert, please visit our flower store.