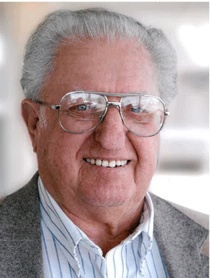 
On July 3, 1927 into this world was born Horace Guidry, the fourth son of Francois Gilman and Alta Begnaud Guidry.  Surrounded by his family, on October 1, 2016, he went on to his heavenly home at the age of 89.

A Mass of Christian Burial will be held at 3:00 p.m. on Tuesday, October 4, 2016 in the Sunrise Chapel at Walters Funeral Home.  Father Gary Schexnayder, Pastor of St. Elizabeth Seton Catholic Church, will officiate the funeral ceremony.  Lectors will be Susie Perry and Carlene LeBlanc.  Gift bearers are Connie Guidry Roberts and Eva Dell Albarado. Interment will take place at St. Peter Mausoleum in Carencro.

Mr. Guidry was born and raised in Carencro, Louisiana, the son of a farmer having lived through the great depression.  As a young child, he received his first accordion as a gift from his dad, bought at the Mervin Kahn Store in Rayne, Louisiana for less than $10.
In 1947, he married Leatrice Trosclair, daughter of Aurelien and Angella Lormand Trosclair, having four children.  In 1954, he went to work with Shell Oil Company for 16 years.  In 1970, he returned to Lafayette and opened Lafayette Valve Service, presently M&J Valve Service.  Mr. Guidry’s passion was playing his accordions, and his love was traveling the world and camping with his Cruisin’ Cajun comrades.

Horace served as the Greater Gulf Coast Boating Association President (2000), Cruisin’ Cajuns President (1990), and was an active member of Citizens of District A and Concerned Citizens for Good Government.


View the obituary and sign the guestbook online at www.waltersfh.com.

To order memorial trees or send flowers to the family in memory of Horace Guidry, please visit our flower store.