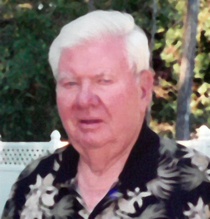 Funeral services will be held Thursday, June 25, 2015 at 2:00 pm in the Sunrise Chapel at Walters Funeral Home for Jackie Don Clothier, 86, who passed away June 23, 2015. Pastor Chad Thibodeaux of Vatican Baptist Church will conduct the funeral services. Interment will follow in Calvary Cemetery.
Survivors include one daughter, Chyrl Clothier and her partner Tina Richard of Lafayette; two sons, Jay Clothier of Lafayette and Don Clothier and his wife Deborah of Sunset; two grandchildren, Tressie Trail of Lake Charles and Logan Clothier of Lafayette and one great-granddaughter, Morgan Trail of Lake Charles.
He was preceded in death by his wife Shirley Camel Clothier; his parents, Harry Otho and Zelda Clothier; and one sister, Peggy Williams.
Jack was a native of Binger, Okla. and resident of Lafayette for the past 65 years. He served his country honorably as a United States Marine during the Korean Conflict.
Pallbearers will be Jay Clothier, Don Clothier, Logan Clothier, Francis Camel, Jim  Patin, and Mason Trail. Honorary pallbearer will be Bill Williams.
The family requests that visitation be held Thursday from 9:00 am until service time.
Special thanks are given to Courtyard Manor Nursing Home and AAA Hospice for their sincere care and concern for Jack's wellbeing.

To order memorial trees or send flowers to the family in memory of Jack Clothier, please visit our flower store.