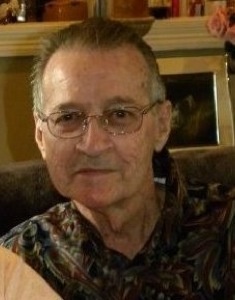 A Mass of Christian Burial will be held on Thursday, April 12, 2012 at 1:00 pm in the Sunrise Chapel at Walters Funeral Home for James Lee Trahan, 79, who passed away on April 10, 2012 at 3:23 am. Father Ken Domingue, pastor of St. Leo The Great Catholic Church of Leonville will conduct the funeral services. Lectors will be Victoria Fontenot and Marilyn Davis; gift bearers will be Joy Trahan Meagher and Miriam Bynum; and eulogist will be his son, Jean Trahan. Karen Broussard, organist and soloist, will perform "Be Not Afraid", "Amazing Grace", "Were You There When They Crucified My Lord?", "On Eagles' Wings", and "Here I Am, Lord." Interment will directly follow in Fountain Memorial Cemetery.
He is survived by his wife, Antonina Trahan; two daughters; Miriam (Bill)) Bynum and Joy Trahan Meagher; three sons, James (Betty) Trahan, Jr., Jean (Gina) Trahan, and J. Rickey (Tammy) Trahan; one sister, Jane Thibodeaux; seven granddaughters, Jamie Trahan, Lexi Holinga, Marilyn Davis, Miranda Carlson, Stephanie Meagher, Crystal Segal, and Victoria Fontenot; five grandsons, James Lee Trahan, III, Chad Trahan, Cody Trahan, Travis Trahan, and Stephen Meagher; ten great-grandchildren; one step granddaughter; two step grandsons; and 4 step-great-grandchildren.
He was preceded in death by his parents, Melanie Stella and John Cleveland Trahan, Sr., and one brother, John Cleveland Trahan, Jr.
James proudly served his country for eight years as a United States Marine during the Korean War. He received the National Defense Service Medal, the Korean Service Medal and the United Nations Service Medal.
He was the founder of Jim's Electric, Inc. in Lafayette in 1958 and worked for 48 years until he retired due to ill health in 2006. He was a member of many professional associations including the International Association of Electrical Inspectors (IAEI), where he hosted numerous annual code change seminars, and the Lafayette Electrical Contractors Association (LECA). He served as past-president of LECA, and received the "Ben Roy Award."
James was very involved in civic organizations as well. He was a 35-year retired JC Rooster, and was one of the founders of the Kiwanis Club of Acadiana. He held the office of President from 1984-1985, was on the Board of Directors from 1985-1989, and served as Chairman from 1989-1993. In 1989 he was awarded the "Kiwanian of the Year" award, and received the "George F. Hixson Fellowship Award" in 1994.
In his free time, James loved to golf. In his lifetime he achieved two hole-in-ones.
Pallbearers for the service will be Chad Trahan, Lee Trahan, Cody Trahan, Stephen Meagher, Jason Segal, Chris Carlson, Jacob Holinga, and Neil Davis.
Visitation will be held on Wednesday, April 11, 2012, from 2:00-9:00 pm, and resume at 8:00 am on Thursday until time of service. A rosary will be prayed on Wednesday evening at 7:00 pm.

To order memorial trees or send flowers to the family in memory of James Trahan, Sr., please visit our flower store.