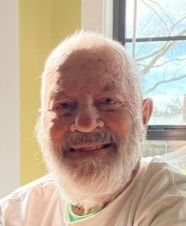 Graveside services were held on Friday, June 25, 2021 in Greenlawn Memorial Gardens for James Lawrence Walker, who passed away on June 24, 2021. in his home in Butte LaRose, Louisiana, surrounded by family and friends. He was 87 years old.
Known as “Jimmy” and “Jim”, he was born in on June 3, 1934 in Boston, Massachusetts, one of seven children, to Josephine Louise Malone Walker and John Edward Walker.
He is survived by his devoted daughters, Mary Ann Walker Patout  and her husband, Roy Jr., and Janet Louise Walker Hanemann and her husband Michael, all of St. Martinville, Louisiana; his son, James L. Walker, Jr. and his wife, Melinda Markham of Holly Springs, North Carolina; two brothers: Edward Walker of Canton, Massachusetts and Thomas Walker of Sanford, Maine; two sisters, Barbara Walker Rose of Providence, Rhode Island, and Margaret Walker Jones of Fort McCoy, Florida; nine grandchildren, Angela Cunningham, Lauren Cunningham, Mark Steven Cunningham, Jr., Genevieve Patout Thevenet, Rudy Vaca, Reynaldo Vaca, James Lawrence Walker, III, Kelsie Walker Lowe, and James William Grayson Walker; and sixteen great-grandchildren, Walker Fladt, Avery and Hunter O’Dell, Zachary Price, Ryan Ransonet, Hope Cunningham, Christian, Joseph and Wesley Thevenet, Amaya, Evelyn, Mia, and Donovan Vaca, and Lauren, Michael, and Thomas Walker.
He was preceded in death by his loving and devoted wife of forty-seven years, Yasuko Yoshida Walker, whom he married during his military service in Tokyo, Japan. Also preceding Jim in death were his parents; sister, Mary Walker Davis; and brother, John E. Walker, Jr.
Jim joined the United States Air Force in 1952, having served during the Korea and Vietnam era conflicts and retired after twenty-two years of service in 1973. After their military career, Jim and Yasuko moved to Lafayette, Louisiana, where he was employed as the Administrative Services Manager from 1974 to 1992 for the City of Lafayette. During that time, he implemented many innovative procedures and cost-saving programs to the ongoing benefit of the City of Lafayette.
Jim remained a patriot dedicated to the dignity and preservation of the United States of America, founded by its forefathers under God. He was relentless in applying all the power of his knowledge, skill and voice in any arena, in writing legislation and educating the public, his friends and family, with the goal of conserving the Constitution and this Republic. He fulfilled his roles as father, grandfather, great-grandfather, uncle and friend in the service of love by way of steadfastness in his deep convictions.
In lieu of flowers, Jim requested that donations be made to Hospice of Acadiana in gratitude for all the care and support they provided for his family, and for families in need throughout the Acadiana Area.
Words of condolence may be expressed to the family online at www.waltersfh.com.
Walters Funeral Home was in charge of arrangements.

To order memorial trees or send flowers to the family in memory of James Walker, please visit our flower store.