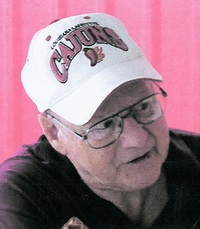 A Mass of Christian Burial will be held Tuesday, August 13, 2013 at 11:00 a.m. in St. Elizabeth Seton Catholic Church for James I. "Jim" Pollock, 82, who passed away August 10, 2013 at his home. Fr. Gary Schexnayder and the Very Rev. Msgr. Russel J. Harrington will co-celebrate the mass and conduct the funeral service. Lectors will be Karin Borel and Kelli Sebastian; gift bearers will be Courtney Sebastian, Traci Cooley and children. Karen Broussard, organist and soloist, will perform, "On Eagles Wings," "How Great Thou Art," "Amazing Grace," and "Battle Hymn Of The Republic." Interment will follow the services in St. Peter Catholic Cemetery in Carencro.
Survivors include his wife of 55 years Gretta C. Pollock of Lafayette; two daughters, Karin P. Borel and her husband Troy of Lafayette, and Kelli Sebastian and her husband Chip of Lafayette; two sons, Kerry G. Pollock of Manasses, VA, and Keith James Pollock of Castle Rock, CO; two brothers, Victor Dean Pollock and his wife Evelyn of Oklahoma City, OK, and Rex Lynn Pollock and his wife Kay of Rockwall, TX; seven grandchildren, Ryan Millett, Traci Cooley, Seth Sebastian, Courtney Sebastian, Haley Pollock, Tyler Pollock, and Kyle Pollock; two great-grandchildren, Lexi Angelle Cooley, and Royce Cooley, Jr.; and four godchildren, Dr. Monica Matthieu, Sandra Matthieu, Wade Simon, and Jeff Harrison.
He was preceded in death by his parents, the former Lena Meyers and Riley Pollock; his brother Donald Pollock; and his sister Darlene P. Bell.
Jim was an All-State football player at Capitol Hill High School in Oklahoma City, graduating in 1949, and Oklahoma City University in 1957. He honorably served in the United States Navy on one ship, the USS Miller DD-535, during the Korean Conflict, and was awarded the Korean Service Medal.
He coached little league football and baseball, and was a founding member of the Acadian Athletic Association.
He was also a founding member of St. Elizabeth Seton Catholic Church in 1975, and proudly held many positions within the parish. He served as a member of Knights of Columbus, Council 5345 for more than 50 years.
Of all the affiliations and honors Jim attained, he was most proud to be widely considered the number one fan of UL Women's Softball, achieving a perfect attendance record for all home and away games. He was rabid in his passion for softball, and can be remembered as "The Whistler" at all the games. He was also known as the "Peanut Brittle Man."
Pallbearers for the service will be Kerry Pollock, Troy Borel, Chip Sebastian, Ryan Millett, Seth Sebastian, and Tyler Pollock. Honorary pallbearers include Rex Pollock, Victor Pollock, J.C. Camel, Gil Gonzales, Darrell Boudreaux, Donald Begnaud, and Richard Doucet.
The family requests that visitation be held Monday, August 12, 2013 from 4:00 - 9:00 pm, and reopen on Tuesday at 8:00 am until time of service. A rosary will be prayed on Monday evening at 7:00 pm.
Memorial contributions can be made in Jim's name to the UL Women's Softball Team, St. Jude's Children's Research Hospital, and Southern Care Hospice.

To order memorial trees or send flowers to the family in memory of James "Jim" Pollock, please visit our flower store.