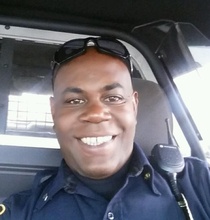 A Mass of Christian Burial will be held at 11:00 am on Wednesday, September 28, 2016 at St. Paul the Apostle Church in Baton Rouge for Corporal Jared Anson Brown, 47, who passed away Monday, September 19, 2016 at his residence. Interment will follow the mass in Roselawn Cemetery.
Jared was a native of Baton Rouge and Lafayette resident for many years.  He graduated from Scotlandville Magnet High School of Baton Rouge in 1987. In 2000 he married Tanya Charles; from their union came two sons, Cody Blake and Carson Brayden Brown.
In 2005 he completed his training with the 14th St. Martin Parish Training Academy and joined the Lafayette City Police Department. In his 11 years of service he rose to the rank of Corporal.
He is survived by his parents Jacques and Lucille Brown; sons Cody and Carson Brown; two brothers, Sergeant Jason A. Brown (Shana) and Donovan P. Brown; one sister, Stephanie B. Thomas (Joseph); mother of his children, Tanya C. Brown; one step-daughter, Chelsea Charles; four aunts, LaGretta Vincent, Rita Norman, Dorothy Christopher, and Geraldine Floyd; two uncles, Wilfred Fleming and Harold Christopher; and a host of nieces, nephews, and cousins.
He was proceeded in death by his maternal grandparents, Lucille and Leonard Fleming, Sr., and his paternal grandparents, Bervy and Alexander Brown.
The family requests that visitation be held Tuesday, September 27, 2016 from 3:00 - 9:00 pm at Walters Funeral Home. Visitation will continue Wednesday morning at St. Paul the Apostle Church in Baton Rouge from 9:00 am until the time of service. A rosary will be prayed at 10:30 am.
Words of condolence may be expressed online at waltersfh.com.
Walters Funeral Home, 2424 N. University Ave., Lafayette, LA 70507; (337) 706-8941 is in charge of arrangements.

To order memorial trees or send flowers to the family in memory of Jared Brown, please visit our flower store.