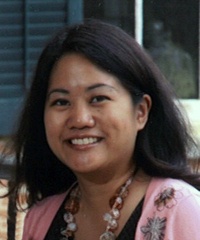 A Mass of Christian Burial will be held Saturday, June 22nd, 9:30 am at St. Elizabeth Seton Roman Catholic Church for Jennifer Losabia Riles, 38, who passed away on June 15, 2013 after a courageous battle against cancer.  The Very Reverend Monsignor Russell J. Harrington will officiate the mass and conduct the funeral service. Interment will take place following the mass in Greenlawn Memorial Gardens.

She is preceded in death by her parents Manuel and Mila Losabia who settled to Acadiana from the Phillipines in 1978.  Jenn, truly a gift of God, was born on August 26, 1974 in Portland, Maine.  She and her family cherished the Acadian lifestyle and took pleasure in the warmth and beauty provided by a typical Louisiana afternoon. Family and friendship were important to Jenn.  She enjoyed spending time with her brothers, Mike and Brian Losabia; her sister, Lisa Kelsey; her nieces and nephews; and her beloved neighbors.

Jenn attended Lafayette High, where she excelled academically and as a member of the band.  She left her junior year to attend Louisiana School for Math, Science, and the Arts and became an elected member of the Student Government Organization.   After graduation, Jenn continued her studies in Natchitoches and obtained her B.A. from Louisiana Scholars’ College.  Throughout school, Jenn forged many special memories and friendships that have lasted a lifetime and beyond.

Upon completion of her education, Jenn returned to Lafayette and married her high school sweetheart, Brad Riles, to whom she was the most wonderful, beautiful wife and friend.  The greatest moment of their life together was when they were blessed with the birth of their daughter, Madeline Riles.  Now six, Maddie attends the Academy of the Sacred Heart where Jenn was an actively involved parent.  She loved her Sacred Heart family, as they dearly loved her.  She was the quintessential mother and admired by all.

For the past sixteen years, Jenn has been employed the LaHaye Eye Center where she used her many talents and shining personality to serve as both the Marketing Director and Refractive Coordinator.  Over the course of her employment, she has developed many close friendships that have served as a great source of love and support.

Jenn was an avid reader and could often be found curled up with a Harry Potter book.  She shared her passion for reading with her daughter and enjoyed nothing better reading a bedtime story to Maddie, tucking her in, and giving her a kiss goodnight.

Jenn was known for a smile that could light up a room and for having the kindest of hearts.  She will be loved and missed by all.

Visitation will be held on Friday, June 21st, 2-8 pm at Walters Funeral Home and resume on Saturday, June 22nd, 8-9 am at St. Elizabeth Seton. A rosary will be led by Deacon Nelson Waguespack on Friday evening at 7:00 pm at the funeral home.

To order memorial trees or send flowers to the family in memory of Jennifer Riles, please visit our flower store.