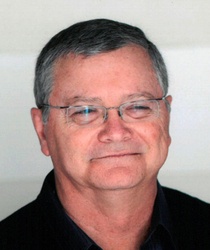 A Mass of Christian Burial will be held Thursday, February 20, 2014 at 12:00 pm in the Sunrise Chapel at Walters Funeral Home for John Reginald Morain of Carencro, who passed away suddenly on February 15, 2014 at his home. Father Bill J. Melancon, pastor of Our Lady of Lourdes Catholic Church in Erath, will celebrate the mass and conduct the funeral service. Interment will follow in Calvary Cemetery.
He is a survived by his wife, the former Georgia Samaha of Carencro; two children, Jeff Morain (Dayna) of Denver, CO, and Adrienne Morain of New York, NY; his mother, Fannie Morain of Addis, LA; one sister, Nyra Guidry (David) of Addis, LA; one brother, Jude Morain (Pat) of Bueche, LA;  three loving grandchildren who will miss their Poppy dearly, John-Paul (4), Mary-Elizabeth “Liddy” (3) and William “Tackett” (3 months) Morain, all of Denver, CO; nine nieces and nephews; seven great-nieces and nephews; and his affectionate companion, a dog named Alice.
He is preceded in death by his father, Leroy Morain.
He was born on September 26, 1958, in Opelousas, LA, to Leroy and Fannie Morain, and worked as an electrician for most of his career, most recently as a Lead Specialist of Quality Assurance for upstream oil and gas for KBR. Known as Reggie by close family and friends, John was a man of few words. He was a fierce and loyal protector of his family. A John Wayne and Clint Eastwood aficionado, he could often be found channel surfing for a good Western, which he undoubtedly had seen hundreds of times.
He loved the outdoors and was an avid hunter, as evidenced by the large mounted elk head that never did quite make its way into the house’s décor. We believe, however, that what he loved best about hunting was making the two day drive to Colorado to freeze in a camp tent while drinking his homemade “bounce” by the fire with his son, Jeff.
He met the girl who would become his wife while they were both in high school and their loving marriage has become an example to their children.  Always waiting to help carry in shopping bags from the car and opening doors, he was a true gentleman.
Known as Poppy to his three grandchildren, he and his grandson John-Paul shared a passion for gizmos and gadgets and spent many grueling hours sitting side-by-side on the sofa with their iPhones, grooming John-Paul to become the Angry Birds champion of the world.
The family requests that visitation be held Wednesday, February 19, 2014, from 3:00-9:00 pm, and resume Thursday morning at 8:00 am until time of service. A rosary will be prayed at 7:00 p.m. at Walters Funeral Home.
Jude Morain, David Guidry, Dave Guidry, Colt Guidry, Richard Landry, Danny Arceneaux, Michael Morton and Johnny Morain (Honorary) will serve as pallbearers.
In lieu of flowers, donations can be sent in John’s name to St. Jude Children’s Research Hospital, PO Box 1000, Dept. 142, Memphis TN 38101, or at www.stjude.org.
Words of condolence may be expressed online at www.waltersfh.com.

Walters Funeral Home, 2424 N. University Ave., Lafayette, LA 70507, 337.706.8941 is in charge of arrangements.
To order memorial trees or send flowers to the family in memory of John Morain, please visit our flower store.