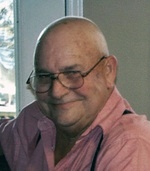 A Mass of Christian Burial will be held at 10:00a.m. on Monday, April 22, 2013 in the Sunrise Chapel at Walters Funeral Home for Joseph Nelson Ewing, IV, 69, who passed away on Friday, April 19, 2013.  The Reverend Gary Schexnayder, Pastor at St. Elizabeth Seton Catholic Church, will officiate the funeral ceremony.  Interment will take place at Greenlawn Memorial Gardens immediately following the services.

He is survived by one son, Joseph Nelson Ewing, V, and his wife Anne of Lafayette;  two sisters, Joyce Meche and her husband Clifford of Duson, and Thelma Avant of Scott;  and one granddaughter, Heidi Beatrice Ewing.
He is preceded in death by his parents, Eva and Joseph Ewing, III;  one daughter, Constance Ewing;  and one brother, Raymond James Ewing.
Mr. Ewing was in the United States Army, serving in Korea, then being deployed to Vietnam.  While enlisted, he received the Vietnam Service Medal, three Bronze Service Stars, the National Defense Service Medal, the Republic of Vietnam Campaign Medal, and was known as a Rifle Expert.
He was a member of the American Legion and the VFW (Veteran’s of Foreign Wars) Post 9822.
Pallbearers will be Brandon Arceneaux, Jerry Arceneaux, Mitchell Arceneaux, Jared Deculus, Greg Oliver, and Jody Oliver.  Honorary Pallbearers are Clifford Meche and Claude Oliver.
Visitation hours will be observed on Sunday, April 21, 2013 from 11:00a.m. until 9:00p.m, and on Monday, April 22, 2013 from 8:00a.m. until time of service.  A rosary will be said on Sunday evening at 6:00p.m.
Walters Funeral Home, (337) 706-8941, 2424 North University Avenue in Lafayette, is in charge of funeral arrangements.
To order memorial trees or send flowers to the family in memory of Joseph Ewing, IV, please visit our flower store.