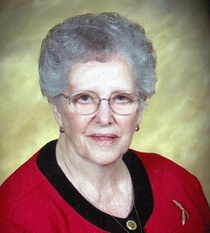 A Mass of Christian Burial will be held Wednesday, January 8, 2014 at 2:00 pm in St. Genevieve Catholic Church for Juanita Fortier, the former Juanita Sonnier, 81, who passed away January 4, 2014 at Lafayette General Medical Center. Father Kenneth Domingue, Pastor of St. Catherine Catholic Church in Leonville and Father Brian Taylor, Pastor of St. Genevieve Catholic Church will con-celebrate the mass and conduct the funeral services. Lectors will be her daughters-in-law Teta and Tonya Fortier; gift bearers will be Benjamin Hernandez and Kaitlyn Fortier. Interment will follow the mass in Calvary Cemetery.
Survivors include her husband, Pierre Fortier of Lafayette; two sons, Leonce and his wife Mary "Teta" Fortier of Hood River, OR, and Joachim and his wife Tonya Fortier of Lafayette; and two grandchildren, Kaitlyn and Christian Fortier, both of Lafayette.
She was preceded in death by her parents, Odile and Claude Sonnier; and her sister, Ruby Melancon.
Juanita was a lifelong resident of Lafayette. She was a member of  St. Genevieve Church parish, and active in the St. Genevieve Legion of Mary.
Pallbearers will be Leonce Fortier, Joachim Fortier, Carl Comeaux, Olivier Chatelain, Scott Campbell and Philip Haynes. Honorary pallbearers will be Christian Fortier and Benjamin Hernandez.
The family requests that visitation be held Tuesday, January, 7, 2014 from 12:00 pm - 8:00 pm and on Wednesday from 8:00 am to time of services. A rosary will be prayed by Father Kenneth Domingue at 6:00 pm on Tuesday, January, 7, 2014.
Memorial contributions can be made to  St. Joseph's Hospice, 1003 Hugh Wallis Rd., Ste. F-2, Lafayette, LA 70508.
Words of condolence may be expressed online at www.waltersfh.com.
Walters Funeral Home, 2424 N. University Ave., Lafayette, LA 70507; 337.706.8941 is in charge of arrangements.
To order memorial trees or send flowers to the family in memory of Juanita Fortier, please visit our flower store.