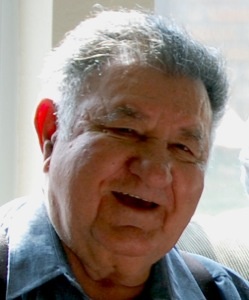 A Mass of Christian Burial will be held Saturday, January 26, 2013 at 9:00 am in the Cathedral of St. John the Evangelist for Jules Gayral Adams, who passed away on January 17, 2013. He was 86 years old. Father Kevin Bordelon, associate pastor of the Cathedral will be the Celebrant of the funeral mass and conduct the funeral services. Jodi Bollich, soloist, and Tom Neil, organist will perform, "Ave Maria", "Our Father", "Panis Angelicus", and "Battle Hymn Of The Republic". Interment will directly follow in Calvary Cemetery.
Survivors include his wife Georgie Barnes Adams of Houston; one daughter, Julie Ann Kramr of Houston; one sister, Patricia Ruth Gaudet of Baton Rouge; four granddaughters, Tiffany Gehlbach, Chantell Holcomb, Michelle Chandler, Kristina Naughton; and eight great-grandchildren, Bryce Gehlbach, Blake Gehlbach, Savannah Holcomb, Hunter Holcomb, Peyton Chandler, Riley Chandler, Drake Naughton, and Reese Naughton.
He was preceded in death by his parents, Eugenia and Celestin Felix Adams Sr.; his son, George Gayral Adams; and four brothers, Lionel Adams, Celestin F. Adams Jr., Robert Adams, and Wilhelm Adams.
Jules was a native of Alexandria, longtime resident of Lafayette, and current resident of Houston for the past 65 years. He was a veteran of the United States Army and served his country nobly in World War II. He retired from Southern Pacific Railroad after 30 years of service as a switchman. He was a member of American Legion Post 133 (Breaux Bridge), Post 69, and Post 40-8; and the United States Coast Guard Flotilla 4.4.
Pallbearers will be Brian Gehlbach, Chuck Holcomb, Sean Chandler, Danny Naughton, Karl Gaudet, and C. F. Adams III.
The family requests that visitation be held on Friday, January 25, 2013 from 4:00-8:00 pm at Walters Funeral Home, and the rosary will be led by Deacon Jay Bergeron at 7:00 pm. Visitation will resume Saturday morning from 8:00-8:30 am at Walters Funeral Home before leaving in procession for his funeral service.
Memorial contributions can be made in Jules' name to Houston Hospice, 1905 Holcombe, Houston, TX 77030.

To order memorial trees or send flowers to the family in memory of Jules Adams, please visit our flower store.