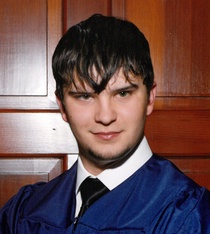 A Celebration of Life will be held on Friday, June 26, 2015 for Kelsey Martin Domingue, 26, who passed away on Sunday, June 21, 2015.  A rosary will be prayed at 2:00 p.m. in the Sunrise Chapel at Walters Funeral Home.
Kelsey is survived by his parents, Karen and Robert Domingue;  two brothers, Travis Richard and his wife Valerie of Delcambre, and Terry Richard of Scott;  his maternal grandmother, Elaine Duhon of Youngsville;  and three nephews, including his godson Garrett Richard.
He was preceded in death by his paternal grandmother, Hazel Sophie Domingue;  and his maternal grandfather, Joseph C.D. Duhon.
Kelsey was a 2007 graduate of Carencro High School, and was employed by Lapp Specialties.  He was a member of Ducks Unlimited.  In his free time, he enjoyed duck hunting, fishing, and cooking for friends and family.
Visitation hours will be observed on Friday, June 26, 2015 from 10:00 a.m. until time of rosary service at 2:00 p.m.

To order memorial trees or send flowers to the family in memory of Kelsey Domingue, please visit our flower store.