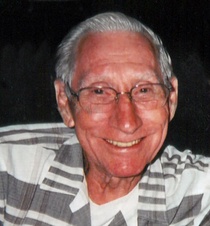 A Memorial Mass will be held Saturday, August 22, 2015 at 1:00 pm in the Sunrise Chapel at Walters Funeral Home for Kenneth Joseph Roeten, 87, who passed away July 29, 2015. Father Gary Schexnayder, pastor of St. Elizabeth Seton Church, will be the Celebrant of the funeral Mass and will conduct the funeral services. Lectors will be his sons Keith and Brian Roeten; gift bearers will be his daughters, Bonnie Roeten and Tanya Callen. organist and soloist, will perform "Amazing Grace", "Shepherd Me, O God", "I Know That My Redeemer Lives", "One Bread, One Body", and "One Eagles Wings". Reflections on Mr. Roeten's life will be delivered by his grandson, Jacob Falardeau.
Survivors include three daughters, Bonnie Marie Roeten of Lafayette, Karla Jean Adendorff and her husband Johan of Scott, and Tanya Ann Callen and her husband James of New London, NH; four sons, Kevin Michael Roeten and his wife Susan of Asheville, NC, Brian Michael Roeten of Dallas, TX, Keith Michael Roeten and his wife Linda of Shreveport, and Mark Michael Roeten of Scott; nine grandchildren, Jacob Falardeau, Gabrielle Adendorff, Peter Daniel Adendorff, Kenneth Roeten, Kali Roeten, Kimberly Roeten, Leigh Ann Chiari and her husband Fabio, Sarah Ann Roeten, and Rachael Ann Roeten; and four great-grandchildren.
He was preceded in death by his wife, Norma Jean Weeks Roeten; his parents, the former Zelia Babin and Gosen Winus Roeten, one brother, Monsignor Winus Roeten, and one sister, Marie Power.
Kenneth was a native Houma, longtime resident of New Orleans and Shreveport and most recently resided in Scott. He served his country honorably as a member of the United States Army during the Korean War, and was employed by Libbey Glass of Shreveport for most of his life. He will be fondly remembered by his friendly manner and always having a smile on his face.
The family requests that visitation be held Saturday, August 22, 2015 from 11:00 am until the time of service. A rosary will be prayed at  noon prior to the service.

To order memorial trees or send flowers to the family in memory of Kenneth Roeten, please visit our flower store.