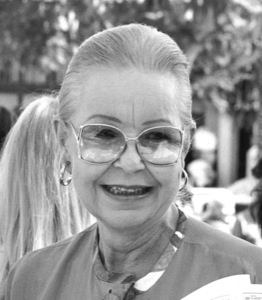 A Celebration of Life will be held in the Sunrise Chapel at Walters Funeral Home on Wednesday, October 17, 2012 at 7:00 pm for LaVonne Collins Owen, who died peacefully at her residence surrounded by family and friends on October 13, 2012. She was 83 years old. Pastor Jacob Aranza of Our Savior's Church will officiate the services. A private inurnment service will take place at a later date.
She is survived by her daughter CeCe Owen Stuller and her husband Matthew; her son Jay B. Owen and his wife Tanya; four step-children, James "Jim" Owen of Dallas, TX, Peggy deJaham of Yatesville, GA, Malcolm "Mickey" Owen of Antelope Hill, CA, and Sue Owen Cross of Laguna Beach, CA; her sister Vergeane Collins Martin and her husband Russ of Mt. Horeb, WI; five grandchildren, Alexandra Graham, Matthew Stuller, Jr., Lauren Stuller, Elise Owen and Isabella Owen; and numerous nieces and nephews.
She was preceded in death by her husband James T. Owen; her parents, the former Mildred Thousand and Stacey Collins; and her brother Winston Collins.
LaVonne grew up in Mount Horeb, WI as the oldest of three children. She attended the University of Wisconsin, and soon thereafter met LSU Head Boxing Coach J.T. Owen while working in Madison, WI. They were married in 1958, moved to New Orleans, and began a family together. She taught shorthand, modeling and etiquette at Spencer Business College. In 1965 the family moved to Lafayette. After teaching she worked at the Lafayette Coroner's Office until her retirement. She was greatly interested in the lives of her grandchildren and took great pleasure in watching them grow and achieve their passions.
Honorary pallbearers will be Jim Owen, Mickey Owen, Matt Stuller, Sr., Matt Stuller, Jr., Jimmie Fontenot and Todd Martin, her godson.
The family requests that visitation be held on Wednesday, October 17, 2012 from 5:00 pm until time of service, and invites all to attend a reception following the service in the Reminisce Room at Walters Funeral Home. They also extend their special thanks to her loving caregiver Susie Toussaint, the staff and friends at Garden View, Dr. Ken McCarron, Dr. Mike Mounier, Dr. Liz Stuller and the staff of Home Instead.
Memorial contributions can be made to St. Jude Children's Research Hospital, 262 Danny Thomas Place, Memphis, TN 38105.

To order memorial trees or send flowers to the family in memory of LaVonne Collins Owen, please visit our flower store.