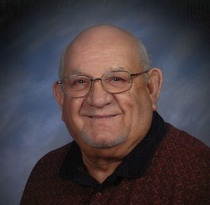 Funeral services will be held Thursday, May 5, 2016 at 2:00 pm in the Sunrise Chapel at Walters Funeral Home for Lawrence Nero, 88, who passed away May 3, 2016.
Deacon Byrne Winn will conduct the funeral services. Roland Roger and Charlene LeMaire will be the lectors, and interment will follow in St. Peter Cemetery in Carencro.
Survivors include his wife, Mary Jane Nero of Carencro; daughter, Priscilla (Richard) Stepp of Scott; son, Timmy (Angie) Nero of Scott; brother, Lee Oran Nero of Carencro; five grandchildren, Richard Stepp, Jr., Wyatt Nero, Todd Stepp, Christy Meche, and Joel Nero; six great-grandchildren, Garrett Meche, Cainnon Meche, Brody Stepp, Bria Stepp, Shelbi Stepp, and Drake Stepp; and one great-great granddaughter, Lailyn Stepp.
He was preceded in death by his parents, the former Anita Cormier and Elie Nero; and his brother, Ashton Nero.
Laurence was a resident of Carencro for most of his life. He served in the United States Army and was a member of the Knights of Columbus Council #7568, the Holy Name Society of Sts. Peter & Paul, and the Bonne Morte Society of St. Peter. He drove Ryder Trucks for 20 years before retiring.
Pallbearers will be Timmy Nero, Richard Stepp, Wyatt Nero, Joel Nero, Garrett Meche, and Cainnon Meche. Honorary pallbearers include Brody Stepp, Richard Stepp Jr.
The family requests that visitation be held Wednesday, May 4 from 4:00 - 9:00 pm, and resume Thursday, May 5 at 9:00 am until time of service. A rosary will be led by the Knights of Columbus Council he belonged to at 6:00 pm on Wednesday evening.

To order memorial trees or send flowers to the family in memory of Lawrence Nero, please visit our flower store.