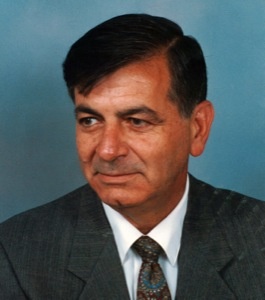 He was preceded in death by his parents, Ruth and Ernest Robbins; and one sister, Ernestine Nygren.

_Robbie_ enjoyed golf, golf, golf! He was an excellent wood carver, taking up the hobby to develop his eye and hand coordination following a stroke in 1996. He would sit on his porch in Houma, LA and whittle away. It was a way to meet people and converse with his neighbors. His home is filled up with native American art work, caricatures of people he would meet, and beautifully chipped carved plates, bowls, and tissue boxes. For a three year period of time, his relatives and friends were presented each Christmas with a set of hand carved nativity figures. He was known as the Crossman, for his love of making miniature chipped carved crosses and giving them away to anyone who would ask for one. He never took any money for his crosses because he felt you can_t buy God. A gift is a gift and in giving he was rewarded with many friends and acquaintances. He completed over 10,000 wooden crosses over the years and he received letters from people in other places of the world regarding his little miniature crosses. He loved to play dominoes with his friends in the many campgrounds he stayed in while traveling in his motor home across the country. He loved to walk his beautiful dog, Bogey. His passion was golf. There was not a golf course he didn_t like, they were all a challenge.

He graduated from Georgia State University with a degree in Business Administration in 1978. He was a computer programmer, and spent several years working for the Bank of Kuwait. He was a member of the PGA, having attained the status of PGA Golf Pro. Being an amputee, his membership in the PGA was a long term goal, which required perserverance and determination to pass the PAT. He never felt handicapped, just inconvenienced. He was also a member of the Chip Carvers Association.

He was a US Army Veteran and served in Vietnam. He was extremely patriotic. He served his country during an era when it was not cool to serve in the military. He volunteered for his military service and he loved America. He could occasionally tear up at the playing of the National Anthem, or America the Beautiful, and he was saddened to see disrespect to his country_s flag. He was proud to be an American, and he was proud to have served.

To order memorial trees or send flowers to the family in memory of Leroy "Robbie" Robbins, please visit our flower store.