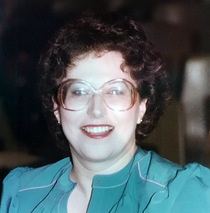 Funeral services will be held Thursday, June 1, 2017 at 11:00 am at Walters Funeral Home in Lafayette for Linda Frances Bergeron, who peacefully passed away Tuesday, May 30, 2017 at St. Agnes Nursing Home.

Visitation will be observed on Thursday, June 1, 2017 from 8:00 am until the time of services at Walters Funeral Home in Lafayette. Deacon Cody Miller of Maurice will officiate. Recitation of the rosary will begin at 9:30 a.m.

Linda was born May 9, 1945 in Oak Park, Illinois and spent her early childhood there. In 1959, the family moved to Sunset, La, and in 1963, she finished Sunset High school as a salutatorian. Following graduation, she attended the University of Southwestern Louisiana and achieved a B.A. degree in Elementary Education in 1967. She taught 3rd grade in Lafayette Parish at Carencro Elementary. While teaching, she obtained a Master of Education degree in 1972 from the University of Southwestern Louisiana.

In 1973, she moved with her brother, sister-in-law and nephew to Houston. There she attended business school and achieved a B.S. in Business Technology from the University of Houston in 1977. Shortly after finishing her second degree, she was hired by Tenneco Oil Company. She moved back to Lafayette and worked at Tenneco until the company sold to Chevron. In 1988, she left Chevron and returned to teaching, eventually teaching in Opelousas and Crowley.

During the 1970s and 1980s, she taught many adults to read. In 1988, she went through the RCIA program at Holy Cross Catholic Church with Leatrice Miller as her Godmother and confirmation sponsor. She spent many years teaching catechism at the church. She also attended satellite courses in Lafayette and achieved a Master of Theology degree from Loyola University in 1991.

Linda, lovingly referred to as “Ninnie” by those closest to her, was always a fountain of knowledge to anyone lucky enough to converse with her. She could literally talk for hours about current events, history, politics- you name it. She was always the most intelligent person in the room, and she had a sense of humor like no other. She also loved football and spent her Sundays watching her favorite teams. In her younger years, you could catch her jamming to Peter Gabriel or Steve Winwood or watching Tom Selleck on t.v. while eating a york peppermint patty and drinking an ice cold coke. She was always poised and taught others the importance of being kind and graceful. Most importantly, she always gave thanks to God. Every time she passed in front of a church, she made the sign of the cross and said, “Thank you Lord for all of my blessings.” Having no children of her own, she loved her nephew, John, and nieces, Kiki and Jeanie, as her own. She shared all of their major life events and holidays and most family vacations with them. She helped with their homework, gave advice to them about anything they were going through and was always willing to help them with anything.

Special thanks to the caring staff at St. Agnes Nursing Home in Breaux Bridge, especially Deanna, for their loving and amazing care of our Ninnie. Thank you also to Hospice of Acadiana for their great care.

In lieu of flowers, memorial contributions can be made to Hospice of Acadiana. www.hospiceofacadiana.org

Online obituary and guestbook may be signed and viewed at http://www.waltersfh.com.
Walters Funeral Home, 2424 N University Avenue, 337-706-8941 is in charge of arrangements.

To order memorial trees or send flowers to the family in memory of Linda Bergeron, please visit our flower store.