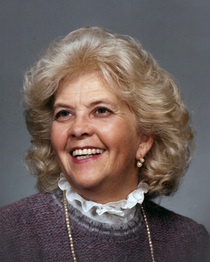 Memorial services will be held at 1:00 pm on Friday, January 24, 2014 at Rose-Neath Funeral Home in Shreveport for Linda N. Reily, 82, who passed away on January 16, 2014 at her residence in Lafayette following a short battle with cancer. Interment will follow at Forest Park Cemetery.
She is survived by four sons, James Shelby, III, Kevin Nicholson, Richard David Reily and Dale Bryant Reily; one step-daughter, Gail Chreene and her husband Billy; one sister, Jerry Nicholson Hays and her husband Peter Bruin Hays, Jr.; eight grandchildren, Sean Reilly, Colleen Reily, Kathryn Chreene, Kelly Reily, Richard (David) Reilly, Jr., Nik Deal, Tegan Stanley, Kendal Watson and her husband Joseph; eight great-grandchildren; and numerous nieces and nephews.
She was the daughter of the late Elbert Bryant (Nick) Nicholson and Agnes Crane Nicholson. She was preceded in death by her parents, husband James S. Reily, Jr., and one brother, Peter K. Nicholson.
Linda was a resident of Lafayette for the past 16 years and a parishioner of Episcopal Church of the Ascension. She retired from Cross Timbers Energy in Fort Worth, Tex. after more than 30 years in the land department. She enjoyed spending all of her free time with her friends and family, especially on the numerous trips she took with her sister, Jerry, her grandchildren and great-grandchildren. She was a die-hard LSU Tigers and Saints fan (Geaux Tigers and Who Dat!)
The family requests that visitation be held Friday, January 24, 2014 from 11:00 am - 1:00 pm. Honorary pallbearers will be Jerry Edward Nicholson, Peter B. Hays, Jr., Peter B. Hays, III, Karl N. Hays, Sean J. Reily, Richard D. Reily, Jr., Billy Chreene, and Freddie Hoffman.
The family would like to thank the staff of Hospice of Acadiana, especially Dr. Morris Hoffpauir, Debra Cormier and Rose for their excellent care and compassion. Memorial contributions in Linda's name to Hospice of Acadiana are appreciated.

To order memorial trees or send flowers to the family in memory of Linda Reily, please visit our flower store.