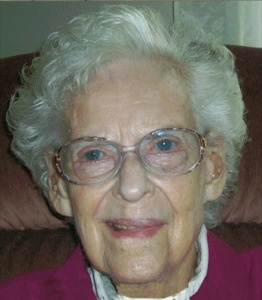 A graveside service will be held Friday, January 21, 2011 at 10:00 a.m. in the Lafayette Protestant Cemetery for Mrs. Lois Knighten Herpin, 96, who passed away in Crowley at the residence of her son on January 19, 2011. Rhett Wyatt of Crossroads Church in Lafayette will conduct the funeral services.

Mrs. Herpin was born in Winnfield, LA and moved to Lafayette at an early age where she grew up. She was employed for five years as secretary to the vice-president of Louisiana Public Utilities, later bought by Cleco. After marriage, she and her husband moved to Port Arthur, TX, where she was secretary of the First Baptist Church and during World War II, worked at the Texas Oil Company. After five years, her husband's employment took them to New Orleans, which was their home for 15 years. While there, she was employed by the Louisiana School Depository for a number of years.

In 1962 Mrs. Herpin and her family moved to Monroe. After having been out of school for 30 years she returned to college and earned her degree in Elementary Education and Library Science. Upon graduating she was employed by the Ouachita Parish School System at Shady Grove Elementary where she remained until retirement. Upon retiring she did volunteer work in the Calico Corner at Ouachita Council on Aging, at the Christian Community Ministries, and in the library at E.A. Conway Hospital.

Mrs. Herpin leaves behind one son, Joe Herpin and his wife Becky of Crowley; one daughter, Carolyn Carter and her husband Jerry of Monroe; one grandson, J.T. Carter and his wife Naomi of League City, TX; one granddaughter, Lindsey Guidry of Lafayette, and a number of nieces and nephews.

To order memorial trees or send flowers to the family in memory of Lois Herpin, please visit our flower store.