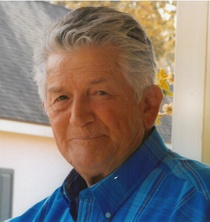 Best remembered professionally as an Account Executive at KATC TV-3 and by those who knew him personally as a loving and quick-witted husband, father, grandfather and friend, Ed Gates lost his battle with pancreatic cancer on September 12, 2015. A Mass of Christian Burial will be held Monday, September 14, 2015 at 2:00 pm in the Sunrise Chapel at Walters Funeral Home to honor his memory. The Reverend Monsignor Charles Mallet will officiate the ceremony and conduct the funeral services. Lectors will be Essie Deshotels and Mark Collins; gift bearers, Mary Beth Langlinais, Molli Schexnaider and Camille Peltier. A eulogy will be delivered by Julie Langlinais. Entombment will follow mass in Calvary Cemetery.
Born in Winnfield, LA, he graduated from Winnfield High School in 1958.  After graduation, he proudly served in the United States Navy aboard the U.S.S. St. Paul where he was able to visit many countries around the world.  It wasn't long after the service that he found his way to South Louisiana where he developed a great career and love that endured a lifetime.
Following his stint in the Navy, he worked for a television station in Waco, Texas, and eventually went on to WBRZ in Baton Rouge.  He then moved to Lafayette and began working for KATC TV-3 one week before they went live on the air and remained there for 40 years until his retirement.  During his long tenure there, he saw many changes in the industry which he embraced and his longevity is testament to his ability to adapt to those changes.  He respected his colleagues, loved his work and the tall, handsome news producer did not go unnoticed.
In 1966, he met the love of his life, Judie Ashy.  The dashing couple dated, fell in love and married on June 10, 1967.  Judie also had a great sense of humor and laughter was a regular sound in the Gates' home.  Together, they created a wonderful home for their daughters, Laura and Julie, and later for their grandchildren.  Ed and Judie shared a life of happiness, respect and great love for one another.
While he loved being with his family more than anything, he also loved the outdoors - especially golf and fishing.  Ed developed lifelong friendships through these sports and whenever he couldn't be located, the city golf course with the "lunch bunch" or Henderson Swamp was a good place to start looking.  He was kind, gentle, loving, funny and a great support for everyone he knew.
He is survived by his wife of 48 years, Judie Ashy Gates.  Two daughters; Laura Gates Davis and her husband Frank of Lafayette; Julie Gates Langlinais and her husband Chris, of Kaplan.  Seven grandchildren whom he loved with all his heart; Mary Beth Langlinais, Molli Langlinais Schexnaider and her husband, Blake; C.J. Langlinais; Ross Peltier; Camille Peltier; Branden Davis and Michaela Verdin.  Two great-grandchildren; Logan Langlinais and Tucker Schexnaider.  His brother-in-law Doug Ashy, Sr. and his wife, Claire; his sister-in-law, Essie Deshotels and his Godmother, Mary Ann Ashy.  His nephews, Steve Collins and his wife, Matti; Mark Collins and his wife; Patti; and his nieces Kelly Collins and Jan Gates.
He is preceded in death by his mother, Mary Richards; step-father Clyde Richards; his father, Hershel Gates; his brother Robert "Bob" Gates, his sister and brother-in-law, Dorothy and Richard Collins; his mother and father-in-law, Adele and Mitchell Ashy; his brother-in-law, Ned Ashy and one great-grandchild, Elaine Claire Langlinais.
Pallbearers will be Ross Peltier, C.J. Langlinais, Branden Davis, Blake Schexnaider, Roland Delahoussaye and Mike Sims.  Honorary pallbearers are Chris Langlinais, Frank Davis, Doug Ashy, Sr., Ashley Melancon, Preston Vincent, Randy Paul, Gene Ebner and Chris Overton.
Visitation will be held on Sunday, September 13, 2015 from 3:00 - 9:00 pm, and resume Monday morning at 10:00 am until time of service. A rosary will be prayed at 6:30 pm on Sunday evening by Sister Doris Roy.
The family extends its special thanks to his fishing and golfing buddies for bringing such joy to his life.
The family wishes to also thank Dr. Brierre and his staff for the wonderful care throughout this journey and also Hospice of Acadiana, especially Dr. Chastant, his nurse Deborah, and his caretaker, Brittany.
The family requests that memorial contributions be made to the Miles Perret Cancer Services, PO Box 80763, Lafayette, LA 70598; and to Hospice of Acadiana, 2600 Johnston St. Ste. 200, Lafayette, LA 70506.

To order memorial trees or send flowers to the family in memory of Loyd "Ed" Gates, please visit our flower store.