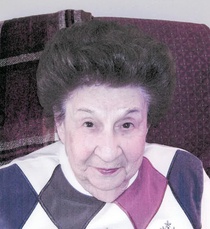 A Mass of Christian Burial will be held Wednesday, October 28, 2015 at 12:00 pm in the Sunrise Chapel at Walters Funeral Home for Marie G. Windham, 93, who passed away October 25, 2015.
Father Howard Blessing, pastor of Holy Cross Catholic Church, will be the Celebrant of the funeral Mass and will conduct the funeral services. Lectors will be Lois Karno and Phyllis Baker; giftbearers, Kristi Lazo and Jill Richardson, and Aly Tugaoen. Interment will be in Garden of Memories Cemetery - Metairie, La..
Survivors include two daughters, Patricia (Dave) Richardson of Gretna, LA and Sharlene (Jim) Chiasson of Lafayette; one son, Bryan (JoAnn) Windham of Kenner, LA; one son-in-law, Chris Mongogna of Destin, FL; two sisters, Shirley Sperier of Crofton, MD and Florence Ertel of Baltimore, MD; one brother, Ronnie Guidry of Goshen, NY; and  seven grandchildren, Christopher Mongogna, Michael Mongogna, Alyson Tugaoen, Jill Richardson, Kristi Lazo, Bryan Windham Jr., and Jeff Windham; and twelve great-grandchildren.
She was preceded in death by her husband, Burty Windham, parents Stella and Henry Guidry, and one daughter, Barbara Mongogna.
Marie was a native of New Orleans and resident of Lafayette since 2004. She was a 30+ year member of the Desk and Derick Club of New Orleans and Lafayette and of the YaYa Sisters.
Pallbearers will be Christopher Mongogna, Bryan Windham Jr., Jeff Windham, and Jared Lazo.
The family requests that visitation be held Wednesday morning at 9:00 am until services commence at noon. A rosary will be prayed at 10:30 am on Wednesday.

To order memorial trees or send flowers to the family in memory of Marie Windham, please visit our flower store.