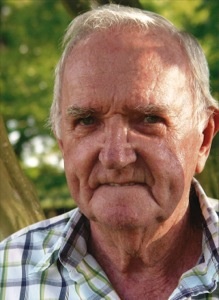 A Mass of Christian Burial will be held at 11:00 am on September 14, 2011 at St. Peter Roman Catholic Church in Carencro for Martin Leger, 82, who passed away at 7:24 pm on September 11, 2011 at his residence in Carencro. Reverend Johnathan Janise, associate pastor of St. Peter Church, will officiate the mass and conduct the funeral services. Interment will be in St. Peter's Cemetery in Carencro.
Born on November 6, 1928, Martin was a native of Church Point and had lived in Carencro since 1985. As a young man he served in the United States Coast Guard during the early post-war years making port calls throughout Europe and South America. He received his honorable discharge on December 3, 1946. He retired after 30 years of service from Southern Pacific Transportation Company in Lafayette.
Always industrious, Martin repaired and restored Volkswagon Beetles in the 60's and 70's, and built and sold over a dozen custom residential homes in the 80's and 90's.
Survivors include his wife of 65 years, Anna Reva Moreau Leger of Carencro; three sons, Larry J. Leger of Douglasville, GA, Gary Keith Leger of Carencro, and Karl Martin Leger of Westfield, NJ; one brother, Hilton Leger of Lake Charles; one sister, Charlene Price of Ashburn VA; five grandchildren, Alexander Leger of New Orleans, Patrick Leger of Vancouver, WA, Candice Leger of New York City, Larry Martin Leger of Douglasville, GA, and Arthur Keith Leger of Douglasville, GA; and numerous nieces and nephews.
He was preceded in death by his parents, Marsena and Elvina Smith Leger.
Visitation will be held at Walters Funeral Home on Tuesday, September 13, 2011 from 4:00-9:00 pm, and resume on Wednesday from 8:00 am until time of service.
The family wishes to thank Hospice of Acadiana and the Ortego family for their compassion, care, and support.

To order memorial trees or send flowers to the family in memory of Martin Leger, please visit our flower store.